As promised yesterday, Ubisoft has published the first trailer of Assassin's Creed: Valhalla. In addition, the French publisher has shared some solid information about the content of the game. Although the company hasn't revealed the exact release date yet, it informed that the game will be released at the end of 2020.

The title, whose development is coordinated by Ubisoft Montreal (and fourteen other teams), will be available on PC, PlayStation 5 and Xbox Series X, as well as on PlayStation 4, Xbox One and Google Stadia. In addition, the PC version can only be found on Epic Games and Ubisoft Stores and will also be made available to Uplay subscribers.

AC: Valhalla will take us on a journey to the Northern Europe from the 9th century. Before the fun begins, we will decide whether we want to become a male or a female Viking warrior. In both cases we will have to lead a character named Eivor, whose appearance will be adjusted to our own preferences, through modification of hairstyle, tattoos, war paint and equipment.

The protagonist will leave the endless conflict in Norway to cross the freezing North Sea with their clan and eventually reach the coast of England. It will be revealed that although this land is rich in resources, the land is torn by a bloody struggle for power. In addition, it is guarded by Alfred the Great of Wessex, who condemns the pagan Vikings, seeing himself as the rightful ruler of civilized England. To find a new home and gain eternal glory (and thus a place in the title Valhalla), Eivor and his (or her) warriors will have to take part in yet another conflict. 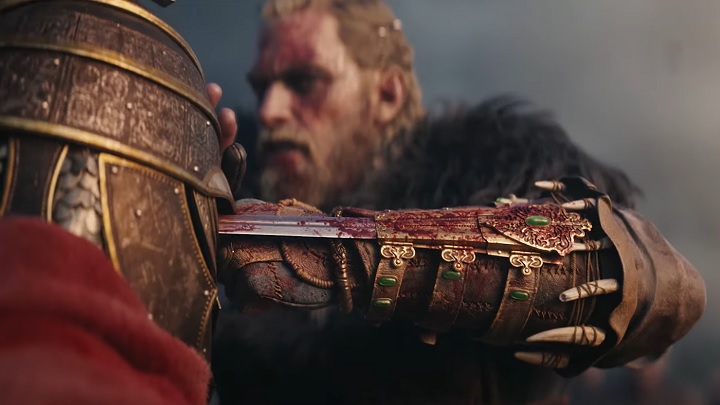 As we can see, you do not have to wield an axe to be a Viking.

Assassin's Creed: Valhalla will give us a vast open world, which we'll be travelling both on foot and on a ship. As Eivor will lead a Viking clan fighting for survival on a new piece of land, we'll be invading resource-rich areas during the game, gradually increasing our sphere of influence. The resources obtained in this way will be useful for the expansion of our settlement.

In addition, the devs announced that they have reworked the combat system, so that will faithfully reflect the Vikings' ruthlessness. This will manifest itself, for example, in a greater emphasis on using two weapons at the same time. There will also be the large-scale battles known from Assassin's Creed: Odyssey, during which there are to be "more enemies than ever before". The game will also offer the possibility of upgrading our equipment with runes, which will increase the combat potential of our weapons and armor.