Yesterday marked the official launch of Battlefield 2042. This is one of the most important games of the year, so it's worth taking a look at how the debut went. Judging by the reactions on Steam - not very well.

By the time of writing, players have posted BF2042 more than 21 thousand reviews on Steam and only 24% of them are positive. The website categorizes this as a "mostly negative" reception.This is the worst score in the brand's history. In the case of Battlefield V 70% of user reviews praise the title. Also Battlefield 1( 84%), Battlefield 4 (86%), Battlefield Hardline (65%), and Battlefield 3 (64%) are doing better . 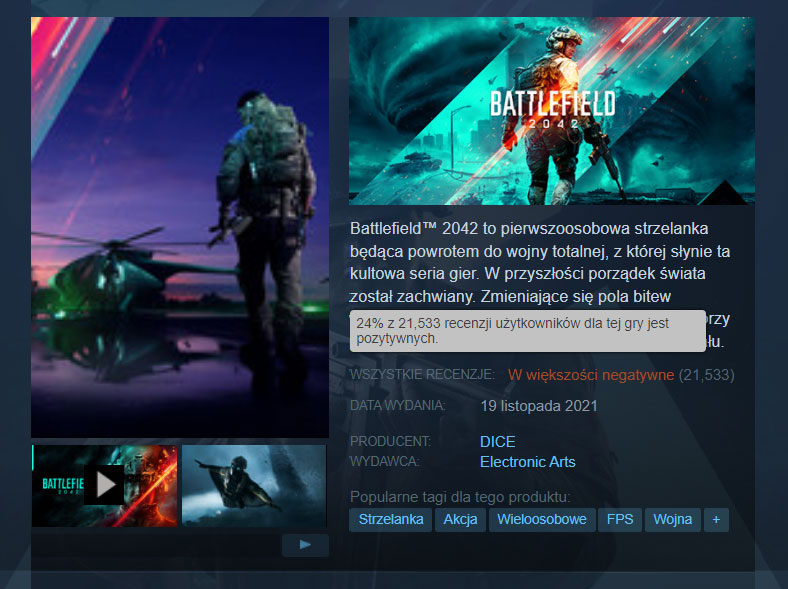 No other installment in the series has received such a bad reception on Steam as Battlefield 2042.

Of course, it should be added that none of these better rated games debuted on Steam. The appeared on Valve's store only recently, when most of their bugs have long been fixed. The reception of Battlefield 2042 should also improve in the future, provided that the developers bring the game to an appropriate technical condition and implement the changes requested by players. Still, such a poor launch should be a warning flag for the developers.

However, poor reception does not prevent the game from achieving impressive sales results. At the time of writing this news Battlefield 2042 is on the first place of the list of global bestsellers on Steam.

Battlefield 2042 also achieves good activity results. aT the hottest moment of the launch day, 105,000 people played the game on Steam. The game also reached the top 10 of the most popular games.

So for now, players grit their teeth and play Battlefield 2042 despite numerous bugs and missing elements. However, their patience will not last forever, so the developers have a limited time to salvage the situation.

Some buyers have already decided to demand a refund. On Steam this is easy, but on Reddit there are posts suggesting that on other platforms users are having some problems. Some of the stories quoted are so ridiculous that it's hard to believe they're true. In one of them, an EA employee just keeps repeating like a robot that he can't help, despite the fact that Battlefield 2042 doesn't run on the client's hardware at all. Another user uploaded a screenshot of a conversation, in which a tech support employee claims in broken English that it's too late for a refund, but that players should be patient as the developers won't let fans' money go to waste and are working on a patch. He also cites the popular streamer Shroud.

The game's release took place yesterday. It simultaneously hit PC (both on Steam and Origin), PS4, PS5, Xbox One and Xbox Series X/S. Those who purchased the Gold or Ultimate edition, were able to start playing a week earlier.