Battlefield 2042 didn't have an easy launch. In a way, EA DICE's shooter shared the fate of Call of Duty: Vanguard and GTA: The Trilogy - The Definitive Edition, meeting with harsh criticism from the players. What went wrong? If you want to find out, I refer you to our earlier message. Here, we'll try to understand what happened, by considering the testimonies of former and current employees of the development team published online over the last two years, which explain, at least partly, the poor reviews of the latest BF.

There's a reason why I wrote "employees" and not "creators". The people involved admit that what they've been doing over the past few years can hardly be called "creation." The devteam's creativity was said to have been held back by the bosses, who – having their own vision of the game and how the players would approach it – remained indifferent to the constructive criticism of many of their subordinates who reported that the game was going in the wrong direction. As a current EA DICE employee with five years of experience wrote:

"The leaders don't want to hear any feedback that isn't positive. [...] Insided, they ignore all the red flags people have been waving at them. Instead they say the same corporate soundbites and pretend everything is fine." 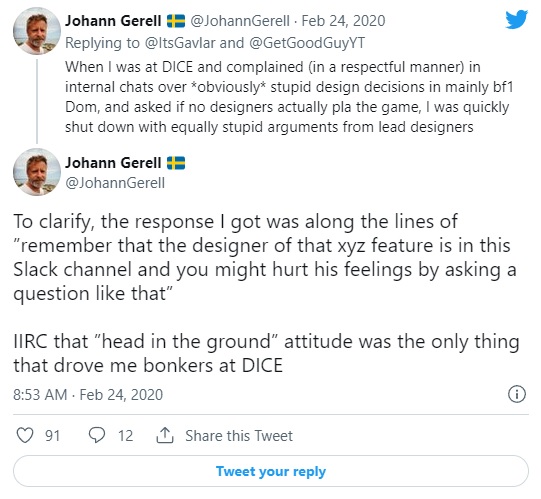 An interesting case of the latter behavior was provided - back in 2020 - by former EA DICE employee Johann Gerell (see screenshot above). He allegedly reported a "stupid design decision" in Battlefield 1 on the company's internal chat room, along with asking if any of the designers had actually played the game. In response, he was reportedly told that it might hurt the feeling of the people he was addressing... The developers put the blame for this state of affairs especially on the new leadership, which began to take over the reins in late 2017 and early 2018. As another opinion reads:

"Cronyism and nepotism are huge problems. [...] What features make it into the game or get development time isn't dependent on how they'll improve the game but on who has your back. This is especially troublesome because current leadership, or rather the couple of people at the top, is obsessed with executing their vision at the expense of everything else."

What was this vision dictated by? Of course - money. And basically, the desire to maximize revenue by monetizing everything. The first person quoted in this post directly stated that DICE has irrevocably become an Electronic Arts studio and a conveyor belt of sorts for the Battlefield series. The passionate, innovative, and quality-driven people that made older Battlefield games strong are now just a memory.

"What is left is an exoskeleton of what was one of the most innovative studios in the world. [...] the same title bi-year after bi-year. What the players are buying now is not Battlefield, but instead, an EA hijacked memory of that Battlefield was or what it could be. Instead of looking how to improve the gameplay for the players, monetization is dictating the direction to go with the game, unfortunately."

An example of this poor decisionmaking can be seen in the words of Patrick Söderlund (see screenshot below), former CEO of EA DICE, who stated around the time of Battlefield 3's release that 128-player battles were already being tested at the time. However, it was decided that they weren't much fun and creating battles for more than 64 people just didn't make sense. Meanwhile, one of the major new features in Battlefield 2042 turned out to be... 128-player gameplay. 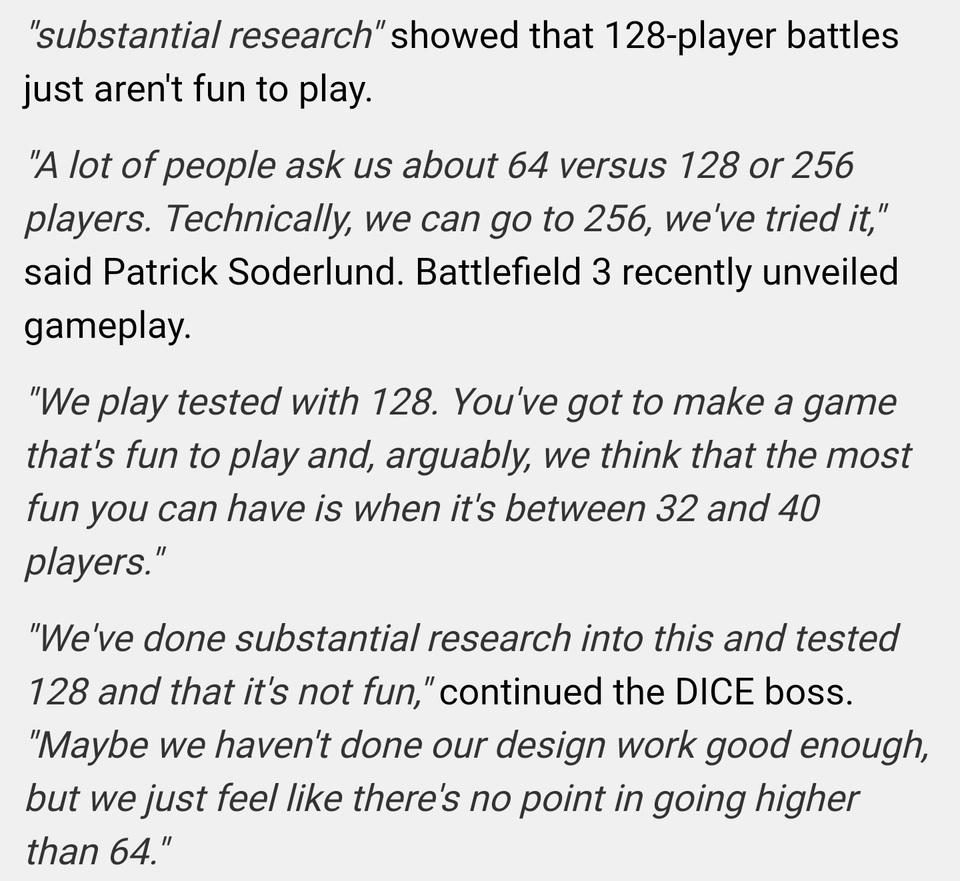 EA DICE employees also accuse the leaders of manipulating data, for example, by carefully cherry-picking the opinions of a handful of players enthusiastic about something on social media, and then convincing everyone that this is the voice of the majority. In addition, the leadership is said not to respect the performance of subordinates, awarding promotions based on seniority rather than actual skills.

Developers also complain about the instability of the Frostbite engine, in which "something always keeps breaking", but this seems to be the least important problem in the bunch. It seems that if nothing changes at EA DICE, the release of the next BF - in two years, right? - could prove to be even more controversial than the latest installment. And if you want to explore the topic further, we recommend following up on the video below.

Insider Reveals Why Star Wars Battlefront 3 Won't be Made

Outriders Gets Second Wind on Steam Thanks to New Horizons