Several months after a lawsuit was filed against Activision Blizzard, the American publisher is by no means done with the scandal over allegations of mobbing and harassment within the company. On the contrary, it seems that each week brings another unpleasant reports about the company, which is rapidly losing allies. The first days of December are no different. Austin O'Brien, community manager at Raven Software, reported of layoffs in the studio's QA department. 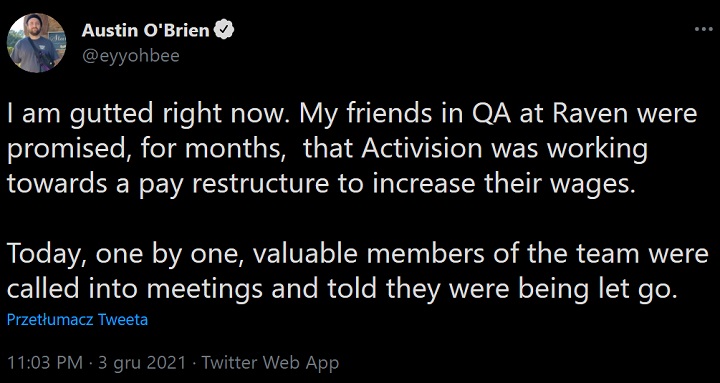 As O'Brien reports (and was confirmed by The Washington Post, Kotaku, and Bloomberg's Jason Schreier, among others), Raven Software testers are being "called in one by one for meetings" to find out if they will have to leave the studio. Some of those "appointments" aren't scheduled until next week, so they won't know if they're leaving until after the weekend. Those who will have to leave, will remain in the team until January 28.

O'Brien has made no secret of his outrage at Activision Blizzard's decision. Barely a few months ago, the company promised that the QA team could expect higher salaries. However, no one bothered to inform him about the progress of the related "restructuring". Kotaku's sources report that it is actually supposed to consist of... absorbing some of Raven Software's testers into AB and laying off many of the remaining employees. The rest will indeed receive raises.

Such a move is not uncommon on the market, but it definitely does not improve the already damaged image of Activision Blizzard. O'Brien points out that many of the testers who were made redundant are "valuable members of the team" and were once told to move to Madison, Wisconsin to work for Raven Software. He is echoed by Tyler Trombley (a game engineer at the studio), who describes the company's QA department as "one of the best he's ever worked with," made up of people with years of experience under their belt.

It's easy to imagine the impact this move is having on morale at the studio, especially since many employees have to wait until next week (this just before the Holidays) to find out about possible layoffs "after many years of crunch time" (in the words of Molly Weaver, employed by the company in a QA position). There will probably be more of the latter since Raven Software will be coming to handle its existing responsibilities (including developing Call of Duty: Warzone, but also supporting other Activision projects) with a smaller team - and probably lacking enthusiasm after the whole thing.

This makes many developers - not just Raven Software employees - consider the publisher's move "unnecessary" or even "cruel". Evan Avillanoza, one of the testers who was fired and was considering leaving the company, bluntly stated that he felt "Activision is an embarrassment to me" (via The Washington Post).

Responses to O'Brien's appeal to his "friends in the industry" to share job offers for their laid-off colleagues quickly surfaced online (suggestions came from Ubisoft, Bungie, and IO Interactive, among others). Gamers also vented their frustration on social media, with O'Brien's original tweet being shared 3.5k times.

It's possible that this is the scandal that made Activision Blizzard not attend The Game Awards 2021 (except for nominations for the publisher's titles). Just yesterday Geoff Keighley announced (via The Washington Post) that he would not be taking a stance on the AB controversy, though he immediately added that he was still considering the company's participation in this year's TGA. Perhaps the layoffs at Raven Software helped him make the call.