UPDATE: The official Twitter feed of Summer Game Fest announced that during the show on June 9 we will see a presentation of gameplay from Call of Duty: Modern Warfare 2.

An atmospheric teaser of the highly anticipated Call of Duty: Modern Warfare 2 has just debuted. Although it does not reveal too many aspects of the title, it announces when we will receive a full-fledged trailer for the game. It will take place on June 8 at 10 am PT.

For several years, new installments of the Call of Duty series have not been released on Steam. It is possible that with the release of Modern Warfare 2 this will change. Steam's official Twitter account has reacted to the above teaser with an emote. 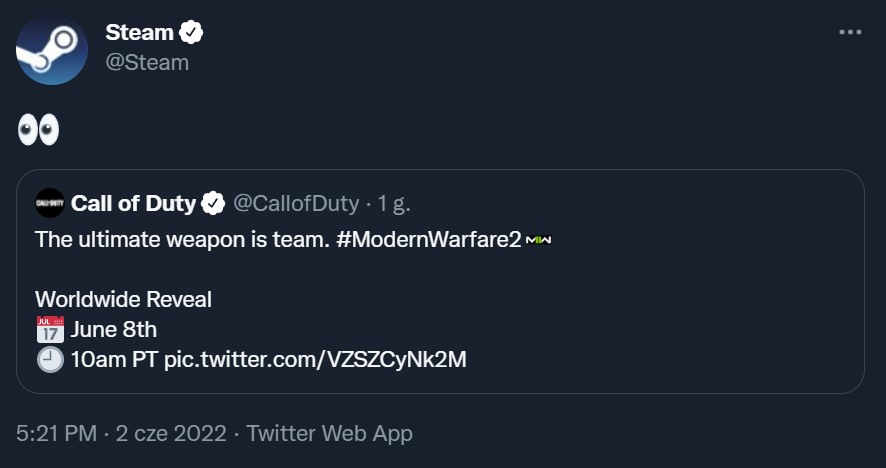 Furthermore, Reddit user Kalinine discovered some time ago that the "Check out the entire Call of Duty" banner on Steam shows a graphic from Modern Warfare 2. However, it was quickly taken down after Kalinine shared the discovery with the rest of the internet.

Call of Duty: Modern Warfare 2 will debut on October 28, this year. Target hardware platforms have not been confirmed at this time, but the game will definitely be released on PC, PS5 and Xbox Series X/S.

Maxing Out a Diablo Immortal Character Costs Over $100K