Pathfinder: Wrath of the Righteous, released a week ago, received a very positive reception from players and critics. Owlcat Games' RPG was also successful on Steam and it seemed that everything went according to the developers' plan. However, complaints began to appear online about one element of the game, which is to be simply frustrating. We're talking about the turn-based combat during the crusade campaign.

Crusade is a system introduced in the latest installment of the Pathfinder series. At one point in the game, players have to lead an armed expedition against demonic hordes. The gameplay changes quite radically. Wrath of the Righteous starts to resemble the popular Heroes of Might & Magic series. It becomes necessary to fight battles with whole armies, recruit new units and construct buildings.

Unfortunately, the basic element of this system did not appeal to many players. We are talking about turn-based battles, which can be incredibly frustrating. All due to the fact that they often last too long. Taking into account that they occur very often, we get quite an unpleasant combination. An example, which sparked the biggest discussion among fans of the title, is a skirmish lasting as many as 827 turns. A screenshot documenting it was published on Reddit.

Players share their experiences and point out many bugs that lead to annoying situations. There are many reasons for the obscenely long clashes. One of them is the very fact of incorrect balancing of individual units. Many players complain that some of them are too strong or, on the contrary, are good for nothing. A big problem are also demon troops, which are characterized by a huge resistance to damage. This leads to situations in which even the largest armies have to spend tens or hundreds of turns to deal with this type of opponent.

"Or when you have 1200 Footmen and you're fighting a 20 unit Ghoul but it perma stuns you for 700 turns in a row before you finally somehow do a proper save and avoid the paralyze," writes Xentrosh

"Gargoyles show up pretty early, and they are mega tanks. They don't do much damage but have a ton of DR and hp. So just be prepared for a long battle if your army isn't very large/powerful yet. Though this is definitely an extreme," reports a_rescue_penguin

Unfortunately, the automatic battle resolution option does not help solve with this problem. Players admit that they often lose far too many units this way. This option is only useful when fighting extremely weak opponents. 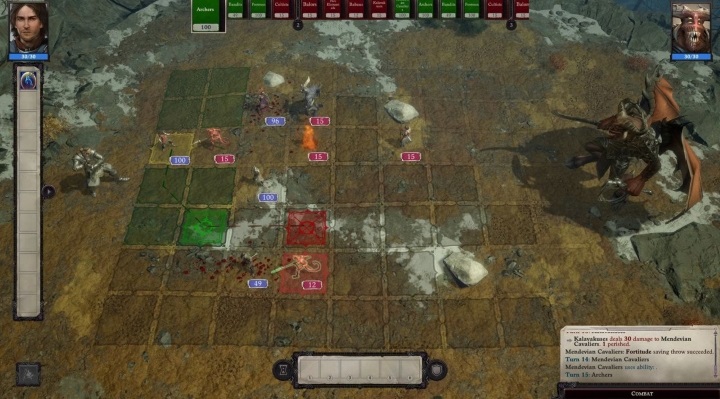 Owners of Wrath of the Righteous have thus been forced to look for other solutions. Some have suggested cheats using modifying save files. By doing so, it is possible to greatly expand our army to the point where no one can match it. Others, on the other hand, suggest installing a program that would automatically click on the appropriate places on the board without the player being in front of the screen. Simply point the mouse at a particularly tough opponent, leave the computer for a while, and come back when the situation is resolved. The constant repetition of the same attack is simply too tedious for many people.

Some players have gone a step further. They find the battles during the crusade so annoying that they'd rather just remove them from the game altogether so they can focus on other elements. With these people in mind a mod called Combat Relief was created. It is quite extreme solution to the problem of endless fights. It automatically resolves all clashes in the game in favor of the player. It also removes random encounters with enemy armies. In two days since the mod was made available it has been downloaded over 3 thousand times.

Voices of players in the web and the very fact of the creation of such a mod is proof that the creators have a big problem. Crusade is one of the key elements of gameplay in Wrath of the Righteous and yet many people prefer to skip it altogether or bend its rules. So the developers have a lot of improvements to make in future updates. The onbvious one is the need to change the balance, which currently does not present a high level. However, many players say that it is equally important that Owlcat Games' title better explains how the combat actually works.

We can only wait for further patches and hope that the creators will notice the voices of the players. Complaints about battles in Wrath of the Righteous, however, started appearing in an increasing number of places across the web. The developers will find it hard to miss them.

Crysis Remastered Coming to Steam With a Discount

Future of Smartphone Market is at Stake; Mediatek Bests Qualcomm