Crytek CEO Avni Yerli has dispelled any possible doubts that the game whose teaser was included in the news is Crysis 4. At the same time we found out that the title is in quite an early stage of production and it will take some time before it is released (also, the team is currently recruiting - more details can be found here). Updates on the game's progress are expected to be published regularly, while fans of the network shooter Hunt: Showdown have been assured that Crytek will not forget about them and will continue to develop the game.

The release of the much-criticized Crysis Remastered Trilogy - three visually refreshed shooters from Crytek - was clearly no accident. The developers' goal was clearly not to improve the games that were in no need of remastering, but to remind fans of the brand. All this in order to announce Crysis 4, which happened today. The first teaser of the game was released, and more information will probably be released "soon"

Interestingly, Crytek might have intended to announce the game a bit later. Its Chinese branch, however, rushed to publish the information (via Eurogamer). The entry has been deleted, but the proverbial cat is out and industry websites have picked up the story. The developers didn't beat around the bush any longer, and announced the game officially. 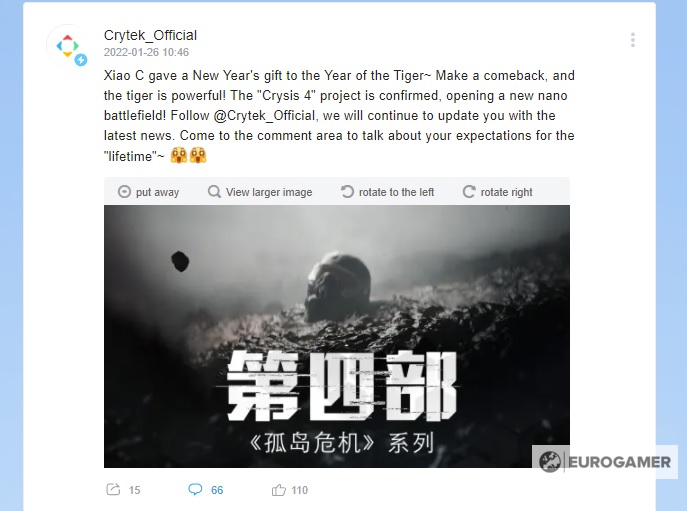 For now we do not know too much about it. It's certainly going to be a first-person shooter with sci-fi elements. For details - as I mentioned earlier - we will have to wait a bit. Nevertheless, we can hope that the title will be released in 2022.