Today, Crysis Remastered, a new version of the classic first-person shooter from 2007, debuted on the market. The game has been released only on Nintendo Switch, and owners of other hardware platforms will receive their editions later.

When the project was announced, the presence of this console among target hardware platforms came as a surprise. Therefore, we welcomed with interest the new video prepared by Digital Foundry, which analyzes the visuals of this release. The video not only shows how the Nintendo Switch edition presents itself in action and what performance it offers, but also compares its graphics with the 2007 PC-based original and the 2011 PlayStation 3 port.

Digital Foundry's analysis shows that the Switch edition is based on the console version from nine years ago. This means that it offers simplified models, poorer vegetation and more blurred textures than the 2007 PC edition. Like the PS3 and X360, the Ascension mission is also missing. 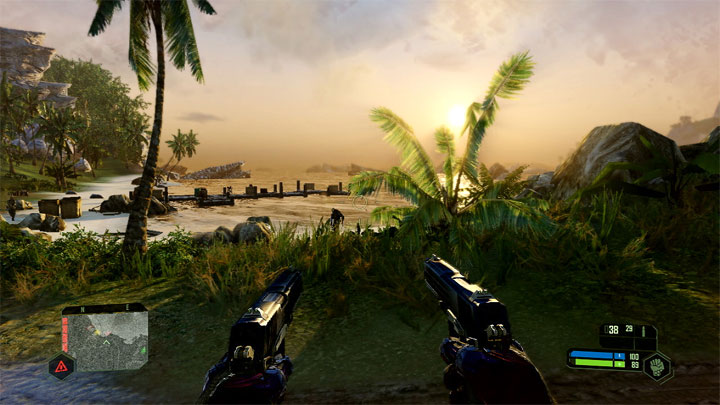 Crysis Remastered on Nintendo Switch is an impressive port.

At the same time, however, significant improvements have been made compared to the previous generation of console editions. Most surprisingly, the addition of SVOGI (Sparse Voxel Octree Global Illumination) is a major improvement in lighting quality. This aspect looks even better than in the PC-based original, especially in sections where the player's character is inside buildings. The ugly blue filter that dominated the visuals of PS3 and X360 versions has also been removed.

The Switch edition runs smoothly most of the time. The exceptions are moments when large parts of the environment are destroyed. Then the game can slow down hard. The parallax occlusion mapping effect for terrain textures has been removed, making them look much flatter. This is surprising because this technique was present in PS3 and X360 ports. The developers explain that the reason for this was the need for good performance on the Switch in portable mode, and this effect could not be easily switched on after switching the console to stationary mode. However, it is possible that this will be fixed in a future update.

As a reminder, Crysis Remastered is also coming to PC, Xbox One and PlayStation 4, but we're still waiting for these editions. Initially, they were due for release along with the Switch version, but the first trailer was so coldly received that the developers decided to delay the release to refine the game. No new deadline has been given yet.

From PS1 to PS5, Video Shows How PlayStation Changed Across Years