One of the main topics that Death Stranding touches on is "connection". The main character of the game tries to "reconnect" America, and the players connect with each other via the Internet to help each other and leave useful equipment for others. However, there is a group of people who try to use this last mechanics against its original idea - in order to make it more difficult for others to play, they are blocking passage to important locations using vehicles. Fortunately, creators are aware of the problem - on November 27 they informed, that they are working on a patch, which is to be published in the middle of December and which will enable us to remove the machines, and also will deal with other problems, such as the lack of possibility to increase font size.

However, the cat is out of the bag, and Reddit is full of posts in which sad players complain about "wheeled barricades" created by other players. An example can be found in the hiding place of a character played by Conan O'Brien, which cannot be reached by any means other than blowing up a car left behind by someone else, or stairs on which someone placed a.... large truck. In the latter case, however, it is worth appreciating the artistry of the "perpetrator", because it was certainly not an easy task. 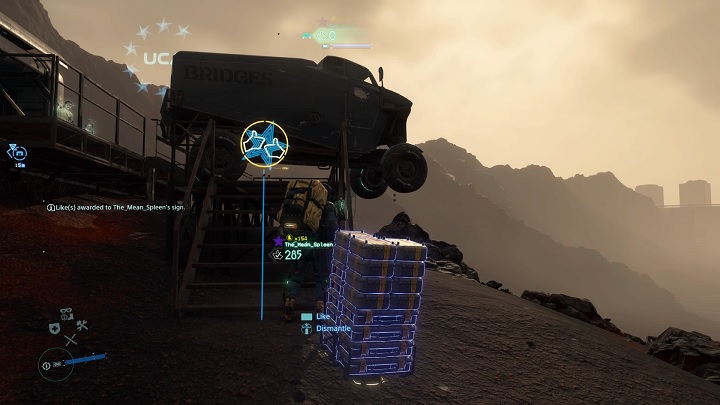 The ingenuity of the players knows no limits. Sometimes, the only question you can ask is How?!

Another example was provided by Eurogamer, whose editorial team came across a car left behind by someone... right in the middle of a freshly built road. As you can see in the picture below, although you could try to avoid it on the left, it could end up in a painful fall from height. 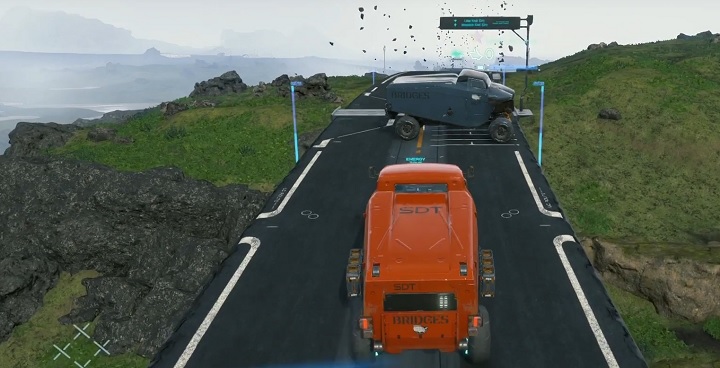 "Did you get driver's license from a wheaties box? I could still fit a tank in there!"

For someone who hasn't played Death Stranding, the whole thing might seem ridiculous. Imagine, however, that for a few hours (or even a dozen or so hours) you travel with a cargo to a specific place only to be almost at your destination and get bounced by.... a car, because you don't have any grenades at hand that would enable you to get rid of it. Or that you are running on fresh asphalt, almost feeling the wind in your hair, thinking about the orders waiting for you.... and suddenly it turns out that someone decided to make your life miserable by blocking the rest of the way with an abandoned truck. Believe me, this is gonna hurt. Those who have felt such "tricks" must be patient and wait for the appropriate patch.

Finally, let us remind that Death Stranding debuted on November 8 on PlayStation 4, and in the early summer it will be available on personal computers. The title divided the critics, but according to its creator, Hideo Kojima, low scores were given by those who did not understand the game (which, as he said, applies primarily to American players). However, this did not prevent the described production from winning as many as nine nominations for this year's The Game Awards (in the categories of Game of the Year and Best Director, among others).