It's hard to find a more intriguing figure in global gamedev than Hideo Kojima. The Japanese developer has once again intrigued fans with an enigmatic post on Twitter, which triggered an avalanche of comments.

Some see it as an announcement of Death Stranding 2, although that's not the only speculation circulating online.

What is Kojima hiding?

Hideo Kojima posted a tweet titled: "the beginning of a new journey." to which he attached a black graphic with three logos (four, if you count Kojima Productions underneath).

The first logo depicts a compass with the words Automated Public Assistance Company, the second is an illustration of a bridge, while in the third, players see the Kraken or some other sea creature. 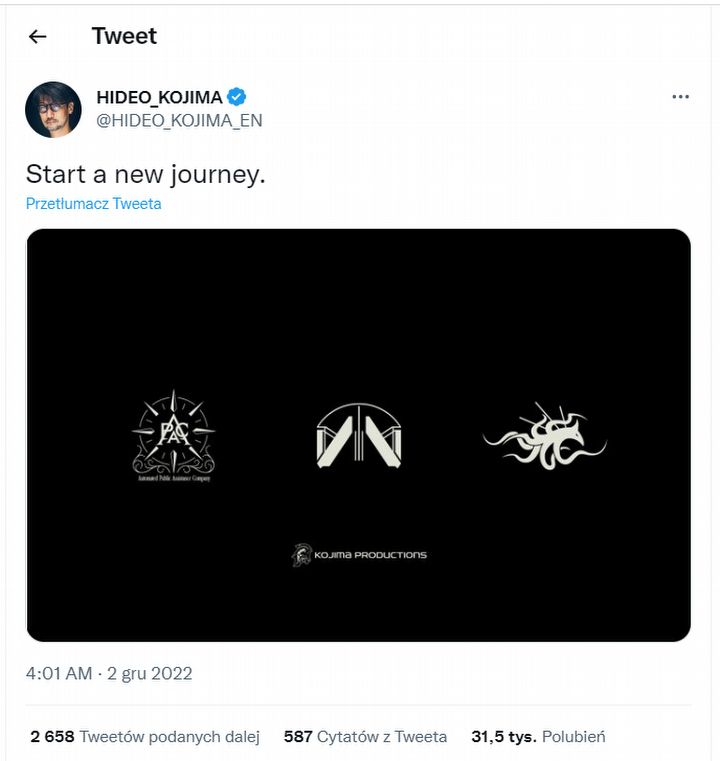 Almost immediately, fans of the Japanese creator began to form theories suggesting that the above logos were to herald a sequel to Death Stranding, in which we will travel by sea.

"That's the compass, the bridge logo and the Kraken. Gentlemen, we are sailing towards Death Stranding 2," concludes Reddit user Beawrtt wrote.

"It's amazing how Kojima can publish 3 logos on a black background with the caption "the beginning of a new journey" and completely delight us with it. [...]," wrote Reddit user Tony C7

Adding extra spice to the matter is the fact that Kojima's post was commented by the official account of The Game Awards, as well as the host of the gala, Geoff Keighley.

So it's very possible that Hideo Kojima's big announcement will be made right at this year's The Game Awards. The gala will take place at 1:30 aam CET / 4:30 pm PT on December 9.