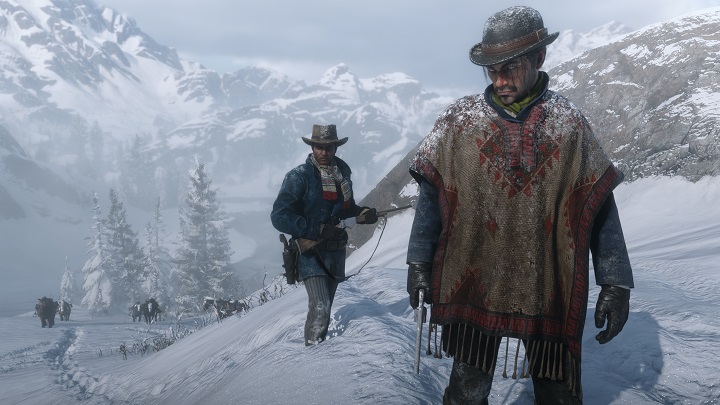 We present the additional content of Red Dead Redemption 2 on PC.

Yesterday, pre-orders for digital editions of Red Dead Redemption 2 for PC have launched. Currently, the purchase is only possible through Rockstar Games Launcher. We encourage you to check the official hardware requirements of the game. Rockstar Games revealed yesterday what improvements PC users can expect compared to console versions.

First of all, the graphics will be improve. Draw distance, quality of global lighting and ambient occlusion will be increased and the textures of trees, plants and animals will be more detailed to increase realism. RDR2 on PC will also offer support for HDR images, 4K resolution (and higher) and multi-monitor configurations. An increase in the maximum number of frames per second is also the element that distinguishes this version from the one available on consoles.

When it comes to gameplay, the players will get a lot of extra content. There will be three new Bounty Hunter Missions, two Gang Hideouts and two treasure maps. The game will also include the task of collecting herbs in exchange for valuable prizes. Of the four additional weapons, three were previously available only in Red Dead Online, but in the PC version they will also appear in the story campaign.

This is not the end, because the game will also include seven new horses, including three wild ones (including the fast and agile Warped Brindle Arabian and Perlino Andalusian - previously available only in Red Dead Online). Not enough? PC users will also enjoy five new Trinkets, such as Shark Tooth or Cat Eye. Each of them will provide bonuses during the game.

You can see that in addition to improved graphics Rockstar took care of additional content in the PC version of RDR2. We would like to remind you that the title will be released on November 5, this year, and until October 22 you can submit pre-orders through Rockstar Games launcher (and thus reclaim bonuses and two free games). From October 23 the game will be available in advance in many digital distribution stores. Steam users will unfortunately have to wait until December to play it. It is also worth mentioning that in a few days the first trailer of Red Dead Redemption 2 in 4K resolution and 60 fps will be released.