Epic Games Store does not have a very good reputation among the gamers. Now they can add a new position to the list of store's offenses. PCWorld discovered in tests that the app consumes large amounts of power, which affects the battery life of mobile hardware. The results showed that Epic Games Store can reduce it by up to two hours.

In the case of Microsoft Surface Pro 7+, the battery life dropped by up to 20%. This was especially noticeable when running the app displayed on the desktop. Epic Games Store "stole" 154 minutes of battery life this way. Minimizing the program to the taskbar reduced this number to 121 minutes. So that's as much as two hours less of tablet use. This situation improved only after turning off Epic app completely. 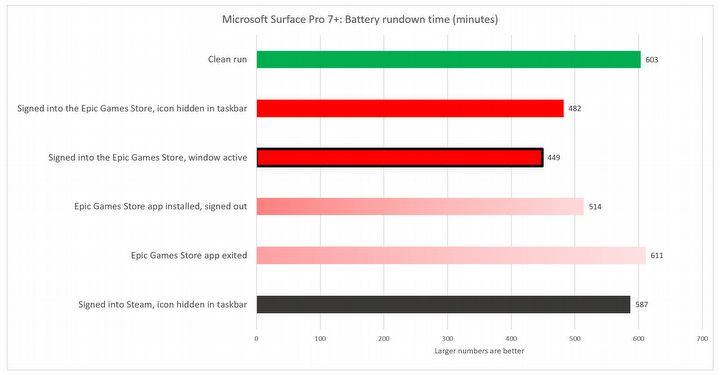 Microsoft Surface Laptop 3 fared better aggainst the app, but also felt its impact. In this case, the decrease in lifespan was 38 minutes. As we can see, the difference between the laptop and the tablet is significant. It is worth mentioning that in both cases PCWorld's editors also checked how the running time is affected by Steam. It turned out that Valve's store doesn't reduce battery life at all. Journalists sent the test results to the company responsible for the app. It seems like Epic Games Store will have some further improvements to be implemented.