In February, we reported on the unexpected resurrection of an ambitious game project called Six Days in Fallujah, which attempts to take a mature look at the Iraq War from the perspective of ordinary soldiers. With time, we also found out that the devs will not be afraid to touch on important political and social topics. Today, in turn, a few minutes-long trailer presenting gameplay fragments and interviews with war veterans, has appeared online. Along with the aforementioned material we learned a few interesting things about the upcoming title developed by Victura and Highwire Games.

The developers reminded us in a press release that Six Days in Fallujah will tell the story of the armed conflict of 2004, when the Second Battle of Fallujah took place. The story will be told with the help of more than 100 witnesses - not only from the perspective of soldiers but also Iraqi civilians.

The comments of all these people will accompany us for a large part of the game, both in audio and in visuals (excerpts from interviews). Their memories from the battlefield will have a direct impact on the challenges we will face on our way. It will be more than a game, it will be an interactive documentary of sorts. To some, the kind of narrative may bring to mind the notable war series called Band of Brothers, which combined a normal storyline with excerpts from interviews conducted with retired military personnel.

Based on the above footage, we can say at first glance that this is a standard FPS that offers decent visuals and looks promising gameplay-wise. Although some people commenting on the video point out the less than perfect shooting model, they praise the extensive system of commands which can be given to allied NPCs (not only opening fire or changing position but also breaking into closed rooms).

So what sets apart the gameplay in Six Days in Fallujah, according to the developers? It's the "groundbreaking technology" they used, called "Procedural Architecture". It makes the battlefield randomly generated and changes every time we decide to play (except for strategic points which are the main objectives of the mission). It involves, among others, a completely different arrangement of individual streets, buildings, or rooms. Work on it lasted for the last 3 years. Creative director at Highwire Games, Jaime Griesemer, explains why he and his team decided to implement such technology:

"Marines told us they never knew what was waiting behind the next door. But, in video games, we play the same maps over and over again. Just knowing the layout of a building in advance makes playing a combat encounter in a video game very different than actual combat."

These words are confirmed by Sgt. Adam Banotai, who fought in Fallujah and is involved in the game's development from the documentary side:

"Memorizing maps is fake. Its that simple. Clearing an unfamiliar building or neighborhood is terrifying. You have no idea whats about to happen, and this is one of the reasons we experienced such high casualties." 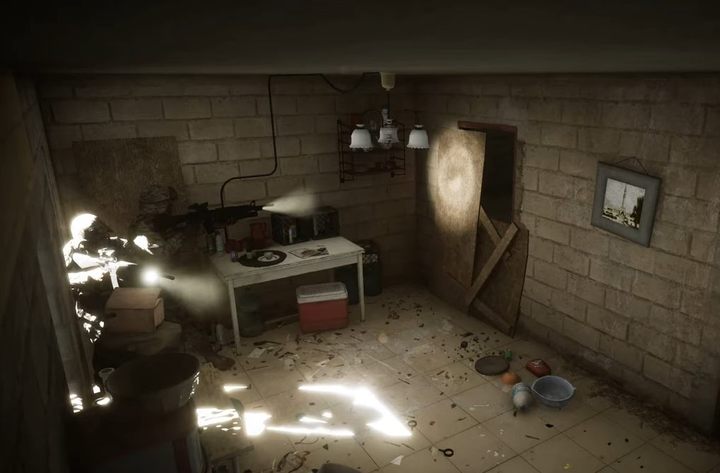 The devs will make sure that we never walk around the same map and into the same room twice.

And you can see that in the trailer - the developers want to make sure the player feels stressed and doesn't know what's waiting for them behind the next door. In Six Days in Fallujah door mechanics, un-ironically, will be one of the most important and terrifying gameplay elements.

How do you like the information revealed by the devs and do you look forward to Highwire Games's title? We remind that we'll wait for the title at least until the late part of 2021. It will be coming to PC, PS4 and XONE, but will also be compatible with PS5 and XSX/S.