This year's gamescom brought a comprehensive gameplay from Marvel's Avengers created by the team at Crystal Dynamics and Eidos Montreal. The players have the opportunity to watch the prologue, which was previously presented behind closed doors during the June E3, and see what the game will look like when playing as the five Avengers. It seems that the game will be extremely dynamic, although so far the devs have not surprised us with anything particularly revealing. Nevertheless, MCU lovers should feel at home here.

Thor goes first, beating his opponents with his Mjolnir (of course there is no shortage of throwing it and summoning it if necessary) or with bare fists. Equipped with firearms, the opponents seem defenseless against a powerful protagonist who throws them around the ma[. The next in line was Iron Man, who goes in pursuit of flying enemies. Flying over Golden Gate Bridge, the heroe and his enemies spread chaos all over the place. Enemies finally decide to stop, and Tony Stark starts fighting them on foot, making use of the combat capabilities of his suit.

Then the creators focus on presenting Hulk's abilities. Much bigger than his enemies in terms of size and raw power, the hero is more than a match for any enemy; even tanks, which he throws around like toys, don't faze him. It seems that the creators have succeeded in recreating the weight of this character well - jumping over obstacles, Hulk destroys the environment, and when he is in the air, you can clearly see a certain inertia.

The prologue also features Captain America fighting with his shield. This one, of course, is not only used to defend against enemy attacks, but also execute ranged attacks and beat enemies in close combat. The last one to enter the stage is Black Widow, who is facing the Taskmaster, who is standing behind all the confusion. The heroine is extremely agile, but as you can easily guess, she doesn't wreak as much havoc as her colleagues; the protagonist must also devote much more time to avoiding enemy attacks, although on the other hand, she can become invisible, which gives her an advantage over her adversaries. 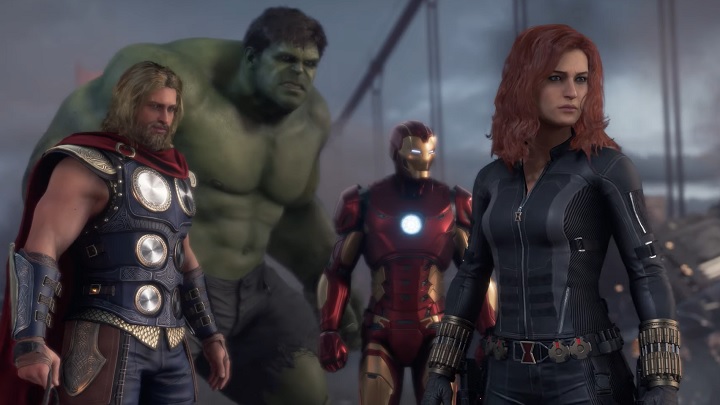 One for all, all for one.

Finally, Marvel's Avengers is coming to PC, PlayStation 4, Xbox One and Stadia. The production will debut on May 15, 2020.

The Cycle From Spec Ops: The Line Devs Launches in Early Access