News has surfaced online that FIFA 22 will be getting a demo version. It has not yet been confirmed by EA Sports, but fans of the series are already sure that they will soon be able to play the new FIFA. 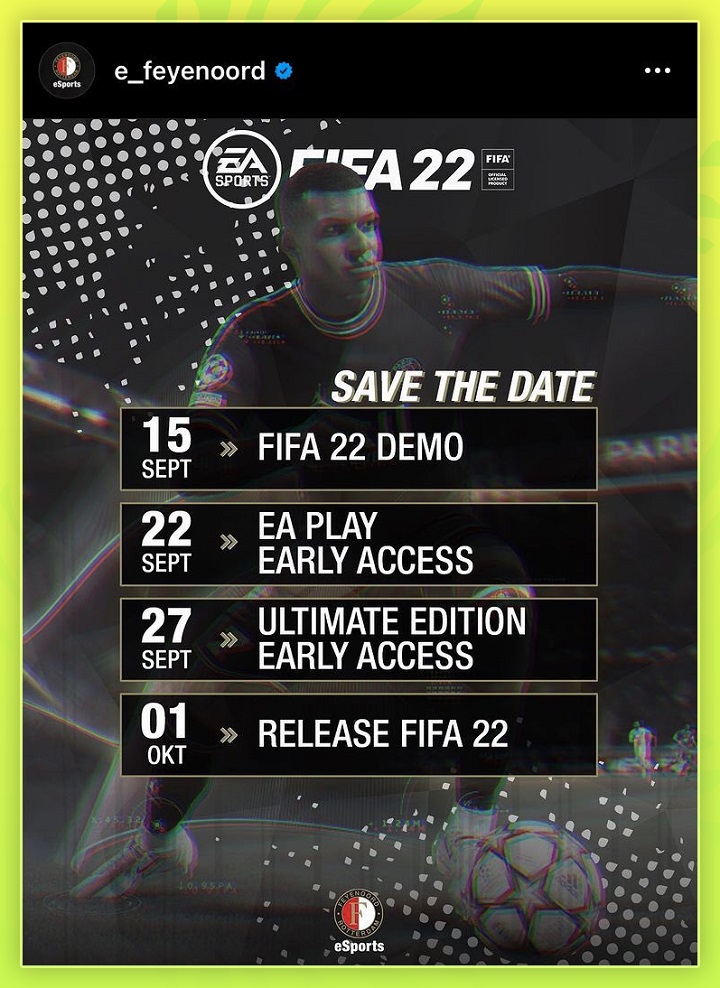 The Dutch must have been a bit hasty with the publication of the post with this image, because it can no longer be found...

From the graphic published on the official instagram profile of the eSports section of Feyenoord Rotterdam shows that a demo of FIFA 22 will be available from September 15. In addition, it seems that, in accordance with tradition, EA Play subscribers will jump into the full version of the game earlier than the rest of the players - already on September 22 - and will be able to test it for 10 hours. The aforementioned image was removed very quickly, but people following the profile of the Dutch club managed to take screenshots and share them with the world.

It is worth mentioning at this point that on the occasion of FIFA 21 EA Sports decided not to to release a demo version. The Americans explained their decision with the fact that they want to devote the remaining time to refine all aspects of the game, and the preparation of a demo would be too time-consuming. Everything indicates that the process of creating FIFA 22 went going so well that the developers could afford to change their minds.

FIFA 22 will be released on October 1, 2021 on PlayStation 4, PlayStation 5, Xbox One, Xbox Series X/S, PC and Google Stadia. On the same day, we'll play a trimmed-down version called FIFA 22: Legacy Edition on Nintendo Switch. You can already pre-order the game, and buying the Ultimate Edition will give you access to the game four days earlier - on September 27.

Age of Empires 4 Trailer Presents Next Civilization and Campaign