The release of the next installment of the undivided queen of electronic racing - Forza Horizon 5 - is just seven weeks away. Developers from Playground Games (the studio responsible for the game) from time to time organize broadcasts titled "Forza Horizon 5 Let's Go!" in which they present new features of the upcoming title. The latest, 8th episode of the series focuses on the game's network module. What changes in this area await us in fifth installment?

At the beginning it's worth noting that we will get a new hub for online modes, called Horizon Open. It's supposed to replace the Team Adventure from previous installments. Changing the name is to emphasize the much greater accessibility compared to the precursor, among other things by getting rid of the ranking system based on skills (often criticized by players). 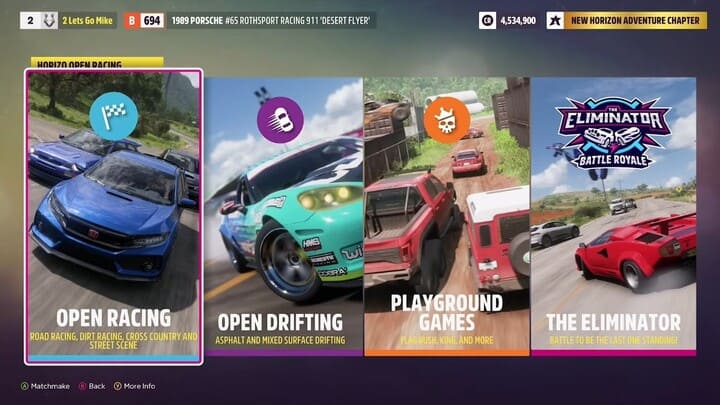 This is how the Horizon Open menu will look like.

Activities available in Horizon Open were divided into four categories: Open Race, Open Drift, Playground and Eliminator. The latter was added to Forza Horizon 4 in 2019 and works on similar principles to battle royale games. Here's how the developers described the rules in FH4:

"Its a Battle Royale mode set in the world of Forza Horizon 4 where 72 drivers compete to become the Eliminator, the last driver standing, by eliminating each other in Head-to-Head races and ultimately winning the final race. Players can get into faster cars by securing car drops indicated by flares in the world. When they beat another player in a Head-to-Head race theyll get the option of taking their defeated opponents car or choosing a car that is slightly better than their current one." 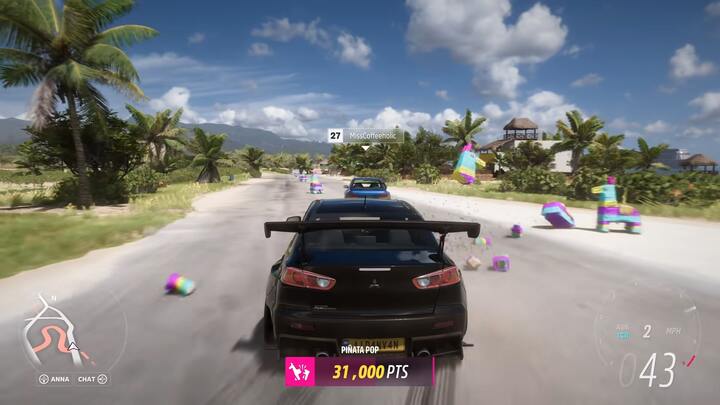 You can go as fast as 188 mph - Fortnite will always catch up with you.

Another highlight is Horizon Tour. In this mode, a rotating set of challenges against the AI await players, which can be undertaken in up to a five-person co-op. In addition, virtual drivers should be pleased with Horizon Arcade, which is a collection of various mini-games, such as: crashing pinatas, a special version of the popular movement game "Simon says" or breaking through targets suspended in the air.

Apart from that we will get many minor "quality of life" changes. One of them is the LINK system, which improves communication with other players by analyzing our interests inside the game and choosing people to play with. A new currency called "Kudos" will be introduced as a reward for kind behavior and clean driving. We will be able to reward your friends or strangers with a vehicle of our choice. The intelligence of the Drivatars will also be improved.

As you can see, the devs are working hard to better convey the feeling of participating in a real festival on a global scale. They have long been ahead of all other competitors - let's hope that they will manage to maintain the position. Forza Horizon 5 will be released on November 9 on PC, Xbox One, Xbox Series X|S, as well as on devices that support Xbox Cloud Gaming.