The year 2021 came to an end for PC gamers planning to get a new GPU. The chip crisis, scalpers, and crypto miners contributed to exorbitant prices as well as low GPU availability in the market. Nevertheless, on a year-over-year basis, GPU shipments in the third quarter of 2021 increased by 25.7%.

According to a market survey conducted by analytics firm John Peddie Research, AIB (Add in Boards - dedicated GPUs used in desktops, servers, workstations, and cryptocurrency farms) sales grew 25.7%. The growth is also evident on a quarter-on-quarter basis, with GPU shipments up 11% compared to the previous three months of the year.

The market division between Nvidia and AMD is quite obvious. Nvidia is the dominant force, holding 79%. 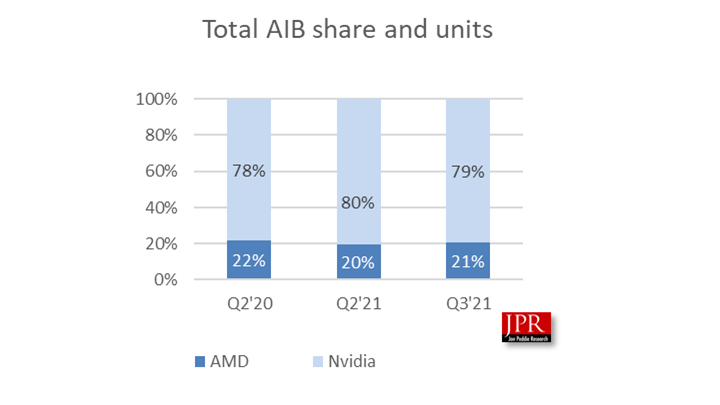 So why, despite increased shipments, is the market situation still difficult and it's hard to find a product at a decent price? There are many factors contributing to this - part of the blame can be placed on scalpers or card-buying bots, and perhaps, the most hated by gamers, crypto miners.

According to forecasts from experts at Intel, Nvidia and AMD, such situation in the GPU market may continue for another year. This is not good news for hardware enthusiasts, although the light at the end of the tunnel may be the release of new cards from the aforementioned manufacturers. We can only hope that at least some of these cards will land in the hands of ordinary PC users.