Halo Infinite turned out to be one of the most polished games of the end of last year. Now we learned that the title is also a big commerial hit.

Microsoft has boasted that Halo Infinite has already been played by over 20 million people, resulting in the game having the best debut in the brand's history. This number should not be equated with sales results. The multiplayer mode is available in F2P model, and the paid campaign can also be played as part of Game Pass subscription. Despite this, the result is still very impressive. 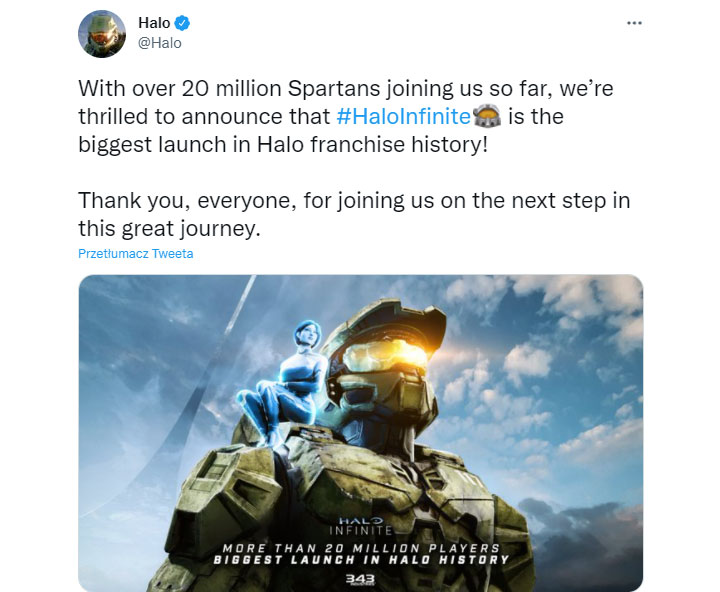 This is not the end of the good news associated with Microsoft. The company announced its financial results for the past quarter. Revenues related to the gaming industry increased by 8% compared to the last three months of 2020. The hardware category earned 4% more, while games and services earning 10% more.

Interestingly, the increase in revenue from the sale of games and services was mainly due to the growing popularity of Game Pass, which recently exceeded the threshold of 25 million subscribers and the debuts of games published by Microsoft. The last quarter of 2021 was exceptionally abundant in this regard. During this period the company released not only Halo Infinite but also Forza Horizon 5 and Age of Empires IV. Announcing the financial results, Microsoft CEO Satya Nadella boasted that Forza Horizon 5 has already been played by more than 18 million people.

On the other hand, there was a decline in revenue from games from other publishers, which was mainly due to the disappointing performance of Call of Duty: Vanguard and most notably the failure of Battlefield 2042.

Recall that the free multiplayer mode of Halo Infinite debuted in November 2021 (in open beta), and the paid story campaign was released in December. The game was released on PC, Xbox One and Xbox Series X/S.

Little Big Adventure Will Return in 2024