What is one of the elements that are inseparably associated with The Witcher? Of course, spectacular fight scenes. We can find them in the books, in the games, in comics and in more or less professional movie productions starring the famous monster hunter. One of the latter has recently appeared on YouTube on the Legend of Micah channel. It has virtually no plot, just more than one minute of dynamic Witcher action. You can watch the whole thing below.

Interestingly, a combat scene inspired by The Mandalorian appeared on the same channel earlier. We post it below. Moreover, the channel also features tributes to Metal Gear Solid, Assassin's Creed, God of War or the Uncharted series.

All this can look a little peculiar at first sight. On the one hand, we have quite cheap-looking costumes and practically nonexistent scenery. On the other hand, we can observe carefully arranged and masterfully executed choreographies. So who are the people behind the creation of these productions? They are a group of professional American stuntmen, headed by Ben Aycrigg. The man had the opportunity to work on such hits as Avengers: Endgame, Baby Driver, Stranger Things, Ozark or Le Mans '66. The videos were directed by Micah Moore. 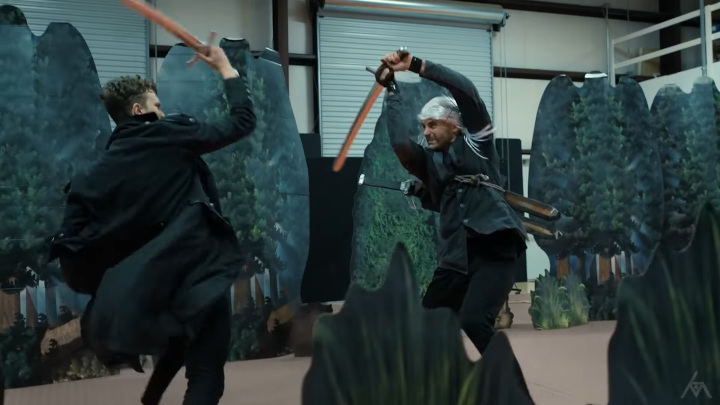 Despite the low budget the fight scenes published on the channel are very impressive.

In case the aforementioned movies awakened your appetites, we would like to remind that the first seasons of The Witcher and The Mandalorian are already available on Netflix and Disney+ respectively. Both have shows have been greenlit for a second season. As far as we know, the filming of new episodes of the former have even started. Unfortunately, due to the coronavirus pandemic they were suspended.