Today the official Facebook profile of the Mass Effect series shared a summary of stats on the choices made by the players in Mass Effect: Legendary Edition. The stats include both more and less important categories, such as Shepard's (the protagonist of the trilogy) creation, the most popular companions or plot decisions - for example, we learned the percentage of people who decided to ally with or exterminate the Rachni queen. The screenshots below contain spoilers, so caution is advised.

For starters, players' decisions when creating their Shepard. It is worth noting that a large majority, 68% of owners of Legendary Edition decided to start their journey with a male protagonist and that the most popular of the six available classes was soldier. 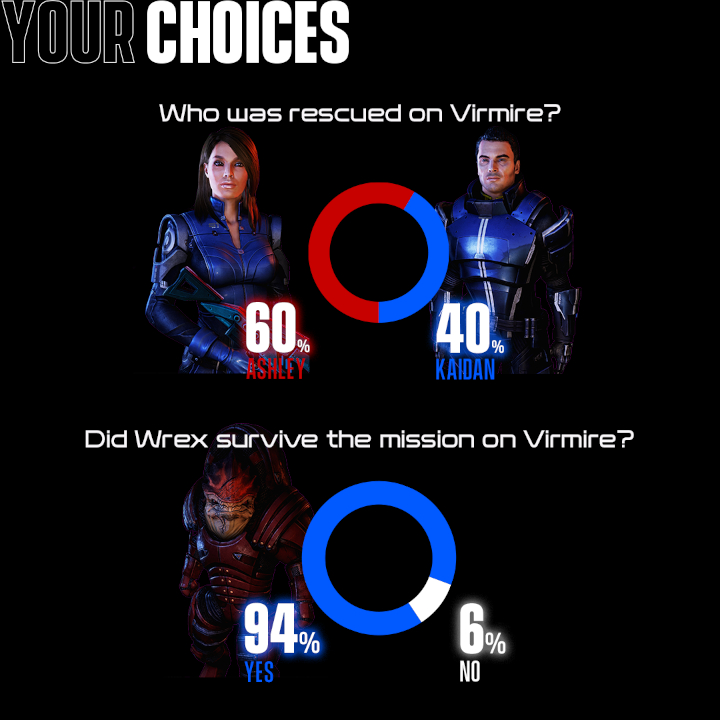 While not everyone may be fond of Ashley, 60% of players kept her, and not Kaidan, alive during the mission on Virmire. What's more, almost nobody let Wrex die during that operation, and only 6% of commanders left the orbit without the krogan on board.

The above graphic shows how many players decided to save Rachni queen and ally with her in the first installment of the trilogy. Also of interest is the number of people who, despite abandoning the queen, rescued her from the hands of the Reapers in the third installment.

It seems that not many players allowed themselves to lose Garrus during the suicide mission in Mass Effect 2, while Mordin usually suffered a grisly fate and in most cases had little chance of returning from this expedition. Also, a small percentage of the players chose to let the Krogan species go extinct, and the same is true of Tali's exile.

As I mentioned earlier, Garrus seems to be the most likable member of the crew, but as we saw in the earlier chart, Tali is also a valued companion and ranked second in the list.

As you can see, not everyone kept their cool and professionalism, as 68% of the players decided to taunt a pushy journalist during an interview on the Citadel. At the end, the developers decided to add a not to the players and quote a very important point: "Where did I miss the last Keeper?".

How do your choices compare to the above? Do you agree with the majority of the players?

Mass Effect: Legendary Edition was released on May 14, 2021 for PC, as well as PlayStation 4, PlayStation 5, Xbox One and Xbox Series X/S.