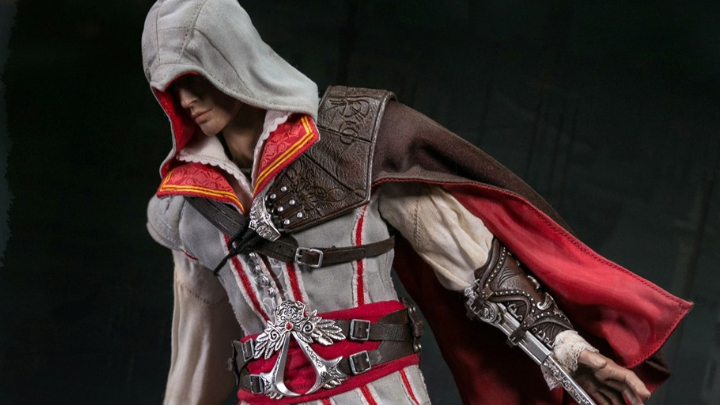 Ezio from Damtoys is full of details.

Damtoys presented the appearance of a new figurine representing Ezio Auditore. The statuette is based on the model of the character from 2009 Assassin's Creed II. It was valued at 232.99 dollars. Collecting figures is definitely not a cheap hobby.

The fgure of one of the most iconic members of the Assassin Order was produced in a 1/6 scale. The detailed miniature was made of plastic and equipped with numerous movable elements. For possible future customers, Ezio will come in a set with four pairs of hands, the Apple of Eden, a sword (Schiavona), the iconic hidden blades and a stand with Assassin's Creed II logo. The statue will be dressed in an outfit made of real cloth. At this point it is possible to place orders for a pre-release version of the figurine. Physical copies are to be shipped in the third quarter of this year. If you are interested in adding the figurine to your collection, BigBadToysStore store offers international shipping.

Ezio Auditore first appeared in the second installment of the Assassin's Creed series, and his story was continued in Brotherhood and Revelations. The character was a nobleman from Florence, who turned from a troublsome young man into a true mentor of the Italian assassin brotherhood. He is a repeatedly mentioned in the series, and at the same time he's the ancestor of Edward, Haytham and Connor Kenway, as well as William and Desmond Miles.