We've known for a while now that Nintendo is pretty strict about publishing content from its games on YouTube. On Saturday, representatives of the "big N" made another step confirming this fact, Namely, they blocked more than 1300 videos with music from their games. The materials were on a channel run by a user known as GilvaSunner, who - as he claims - did not monetize the videos. He published them only because the soundtracks from Nintendo games, included in the list below, are not available on streaming services such as Spotify, which means that the only way to listen to them is to run the game in question. 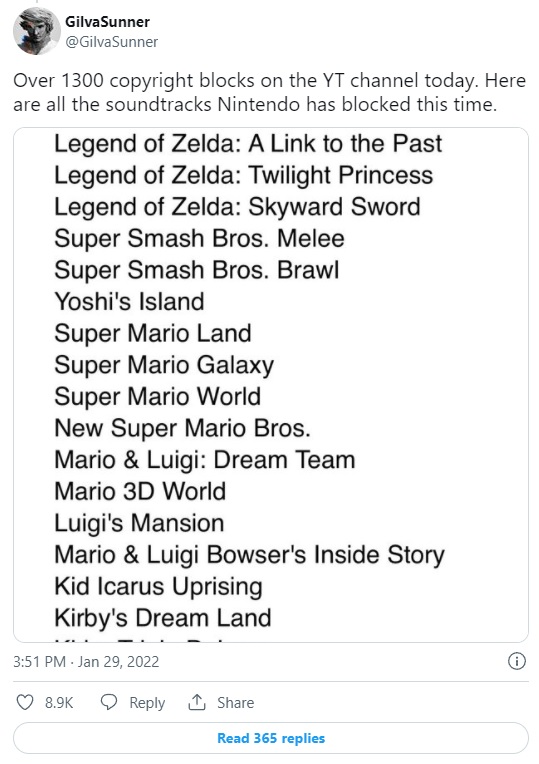 Interestingly, Nintendo did not contact GilvaSunner for the first time. The Japanese company was said to have made similar claims in 2019, but back then, no videos were removed. It seems to have worked this time - although the soundtrack from Super Mario Sunshine is still available on GilvaSunner's youtube channel. It doesn't appear that the footage is set to return. It's equally unlikely that Nintendo will publish OSTs from its games on streaming services, although such a move would provide the company with additional revenue.

Nintendo is known for being very protective of its IPs. It's not just about YouTube videos. The company also battles pirates:

Nintendo Creators Program - a fiasco from years ago

"Big N"'s restrictive approach mentioned at the beginning of this post manifested itself a few years ago with the founding of the Nintendo Creators Program. This idea, however, quickly proved to be a failure, as both content creators and fans of game series such as Super Mario or The Legend of Zelda quickly found it too limiting and simply unfair. Nintendo made some concessions, setting guidelines according to which any videos (including streams) or images that copied the content of the company's games without any creative contribution of the person who made them available were not allowed.

God of War is PlayStation Studios' Biggest Success on PC

We Have Universal Shortages, and PC Market Recorded Massive Growth in 2021