The echoes of yesterday's first gameplay of from Hogwarts Legacy, revealed during a special PlayStation State of Play event, still linger. The whole thing lasted a little over 22 minutes and consisted of a part showing the gameplay and interviews with the developers. Both were warmly received by the players.

The gameplay itself has already been watched by over two million people on the PlayStation channel on YouTube. By the time of writing these words, the material has collected 122 thousand thumbs up. In the comments we also have a festival of praise. Internet users like the recreation of the world of Harry Potter and the atmosphere of the game. There are also opinions that what was presented vastly exceeds expectations.

Not to sound completely baseless, let's take a look at some of the comments posted under the Hogwarts Legacy gameplay video on the official PlayStation YouTube channel:

"This is the game I've been waiting for more than 15 years and this could be a whole new chapter in RP gaming. It feels like I'm back to my childhood haha. Big up to the developers for this masterpiece, I think I'm speaking for many Potterheads!," writes Ben.

"This game is a true representation of what everyone expected from a Harry Potter RPG. It has everything I wanted and even more. It was worth the wait to get a proper game", writes Akin Oezer.

"The environments look beautiful and the dialogue seems surprisingly polished. I hope the gameplay turns out to be as well integrated as it looks here," writes tenou213.

"It’s like they asked fans “what would you like in a Harry Potter game?” and gave us EVERYTHING. We SEE YOU DEVS, AND WE LOVE YOU," writes Pastelle.

However, there were also some concerns raised in the comments. Here's one of them:

"What I didn't like was that the human enemies just stand around waiting to be attacked or until someone else's attack is over. Hopefully this can be corrected before release," wrote SooRandomTV.

Also on Reddit we can find a lot of praise for the presented gameplay from Hogwarts Legacy. Here are a few statements:

"Brewing potions, growing plants, taking care of creatures... All of this is better than I imagined. I really like the way the Room of Wishes was implemented. The first two hours of my gameplay will be just walking around the Castle. I'm very happy that it exceeded our expectations," wrote FPBagel.

"It looked so good! I’m so happy they have book accurate stuff that the movie left out. Looks super close to the books. Stuff like peeves, Binns the ghost history professor, the kitchen and all common rooms, ect. HYPED," writes MyHomeboyPablo.

Image summaries have also appeared. Here is one of them. 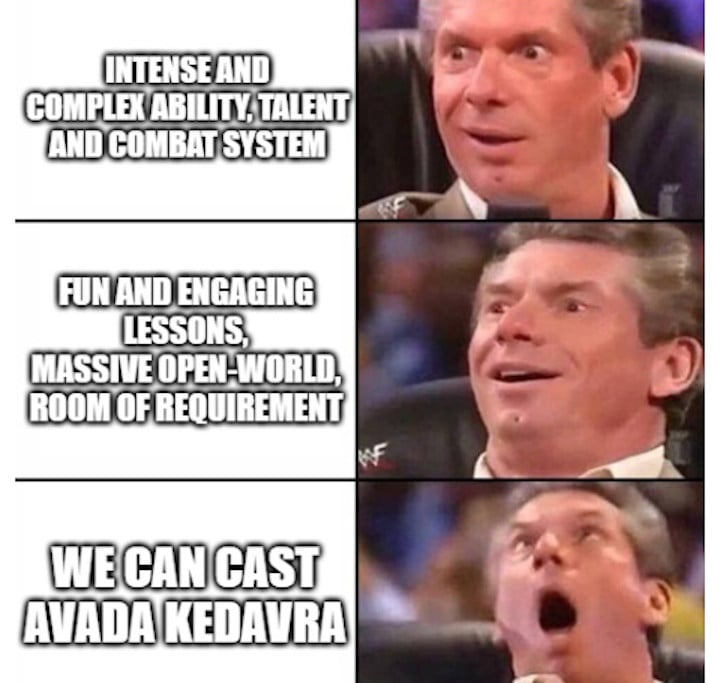 Despite the general excitement, some on Reddit are also pointing out some shortcomings. There are some complaints about character models and unnecessary QTE fragments or fears of a plethora of uninteresting collectibles. You can also find fans of the books pointing out some inaccuracies in the universe. We are talking about the fact that in normal circumstances it would be impossible to see a "clash" of spells(the wands would have to have the same core) or errors in the operation of the Accio spell.

Among the other elements that drew the attention of players is the map, which appeared for a moment during a segment with the developers' statements. Players point out that it is huge, with Hogwarts itself occupying only a small portion of it. Here, of course, there are also some concerns about whether the world will not be just an empty shell and whether it will be filled with interesting content.

The issue of microtransactions

Many players also wonder whether Hogwarts Legacy will have microtransactions. For now, one of the creators reassures on Twitter - at the moment their implementation is not planned. But what will it be like eventually? Everything should become clear in the next few months. 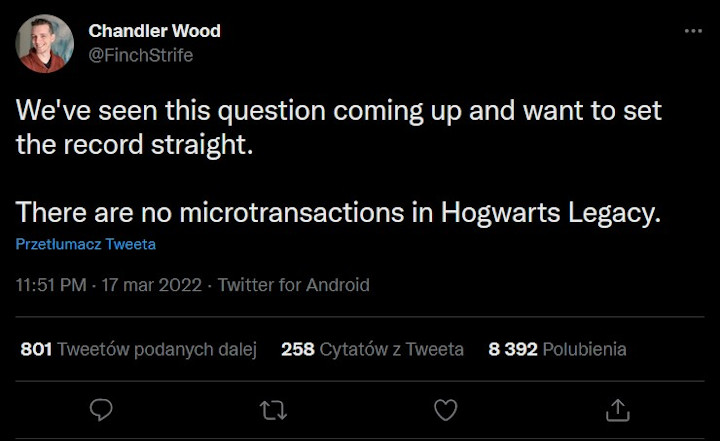 We remind you that Hogwarts Legacy is expected to launch at the end of this year. According to the official FAQ, the game will appear on PC, PlayStation 4, PlayStation 5, Xbox One, Xbox Series X/S and Nintendo Switch.