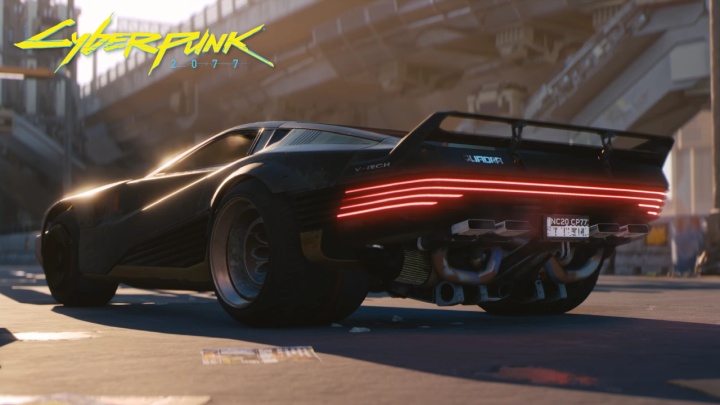 The Quadra Turbo R is one of the coolest vehicles in Cyberpunk 2077
IN A NUTSHELL:

The official launch of Cyberpunk 2077 is scheduled for November 19. We've already learned the system requirements, but we know about the game more or less as much as the developers at CD Projekt RED are willing to reveal. However, watching gameplays is not the same as actually playing the game. And that was an opportunity given to the journalists from the Brazilian website UOL Start.

They played Cyberpunk 2077 for three hours via streaming and answered several player questions along the way. Here they are, along with our summary. 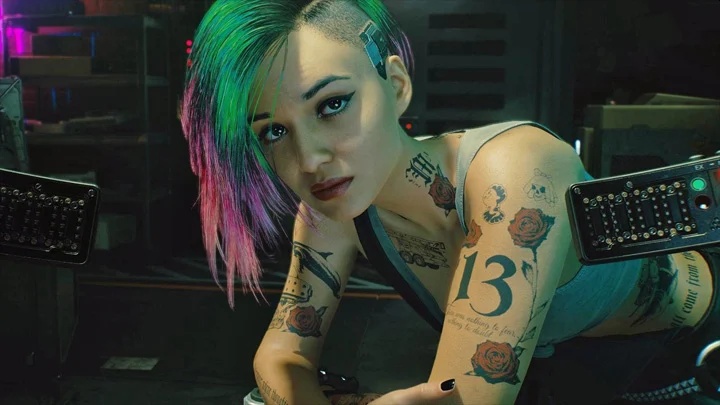 Cyberpunk 2077 will take us to the world of cyberware

"I have some doubts about how the mission structure looks like, if it's a Witcher-type design that has a "to-do list" with points of interest on the map, or something less hands off, like The Legend of Zelda: Breath of the Wild".

If you compare Cyberpunk to The Witcher 3 or The Legend of Zelda: Breath of the Wild, the game will be closer to the former. The map view looks similar to typical sandbox games, and is full of point of interest icons. During one of the missions played by the editors, attention was paid to enemy behavior. The Tiger Claws gang reacted to the presence of the player with a verbal warning and attempts to chase them away from their area. Only when the player revealed his true intentions did the gang members respond with fire. 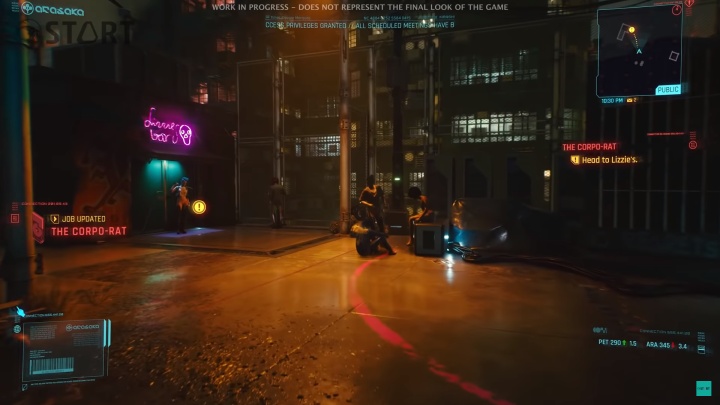 Player's influence on the game world

"How much can your actions affect the game world? For example, if I accidentally run over a pedestrian, what consequences will this have? Will it affect us, cause temporary effects, or will it actually change the whole playthrough?"

The editor of Start performed a test in order to answer this question, driving over pedestrians and killing random people during a gang shootout. However, this had no immediate effect in the game. Neither can such senseless violence always be resorted to. While in the bar, the character couldn't pull out a gun at all. Another time, literally a few seconds after a shootout inside a building was triggered, the player was eliminated by the security services.

"I wanted to know if you feel that you are in a completely different playthrough (or at least have a different perspective on a scene/mission) when choosing different approaches to resolving a conflict, like in Deus Ex."

The editor talks about the mission in the prologue, which offers several possible ways to be played out. It was already shown on the gameplay, but only one of the possibilities was presented. Meanwhile, there are many more, and some of the methods can affect the plot and even the entire game universe. For example, a gang leader can be killed, so the game world will have to take the lack of this character "into account" in the development of the plot. With the right amount of cash, you can also avoid forceful solutions and complete the mission without bloodshed.

Personalization of a player character

"Does the character's penis, (...) offer any real functions?"

In Cyberpunk 2077, you can adjust the appearance and gender of the character, including their body. Gender is not limited to just two options, you can create a transsexual hero. There are many possibilities of visual personalization, from tattoos to piercing and scars. The most intimate body parts are also included, as this is not exactly a prudish game. Here, too, some settings regarding type, "version" and shape have been made available to the players. It is not known, however, whether the character's naughty bits will perform any function in the game. The time given to the editors of Startup was too short to check this particular element. 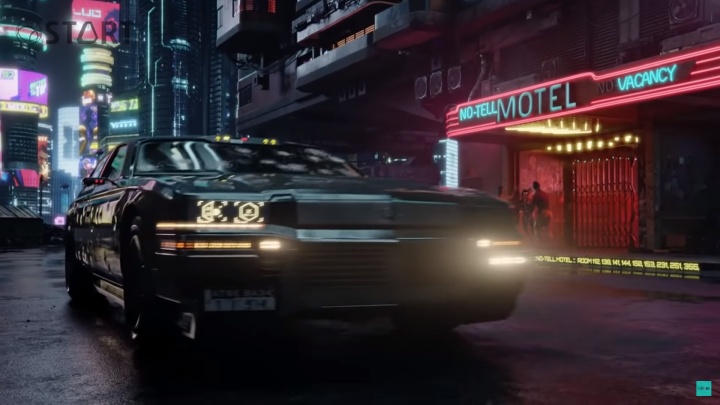 Night City in Cyberpunk 2077 has a great atmosphere. Source: Start

"I want to know about the infamous first-person view and character personalization. Was it just an excuse for better immersion? And are there many opportunities to admire the character that we have created?"

The first-person view fulfills its purpose and builds the immersion well. Some implants affect the image seen by the character and thanks to this perspective, the impression of their use (including interference due to a malfunction or virus) becomes the player's experience as well. When it comes to the opportunities to look at one's own character, the website's editor did not have many of them. It is visible in the menu and will probably apprear in the mirrors, which in the current version of the game do not function properly yet.

"I would like to know if you can see the character's body when you look down."

The body model of our character is visible. The position of the legs and hands reflects the situation in which the player is currently in. It is also an additional answer to the question asked earlier - you can look down and see the character created by the player.

"I wanted to know how do you hide, hack and fight in close quarters."

There are two types of attacks in the game while in stealth: incapacitating or lethal. You can also hide bodies. Hacking, on the other hand, is a mini-game, which is a bit like playing with a hex editor. It requires performing procedures and memory management. Unfortunately, the available time allowed only for getting to know the character skills only up to the second level. According to the editor of Start, this is too little to know all the options. It seems, however, that Cyberpunk 2077 will not contain elements in this area that no longer occur in other games. In the demo it was possible to fight in melee using a katana. There are two types of punches, blocks and parries. When the player gains momentum, they can use special moves. Fighting with this blade gave the editors a lot of fun.

"I have big doubts about the progression system (both perks and attributes) and how to complete a mission only through conversations!"

The character progression in Cyberpunk 2077 is quite extensive. You can assign experience points to 5 main attributes, such as body build, reflexes, intelligence, technical skills and cool (equivalent of charisma). For each of these attributes there are several skill trees. For example, in "body build" there are three such options, with around 20 perks each. The game time allowed the editor to reach only level 2, so not everything could be checked. As for the classes, there are no such choices in the game, there is a lot of freedom in character progression. Cyberware can give additional possibilities and is also an element that creates a character build. 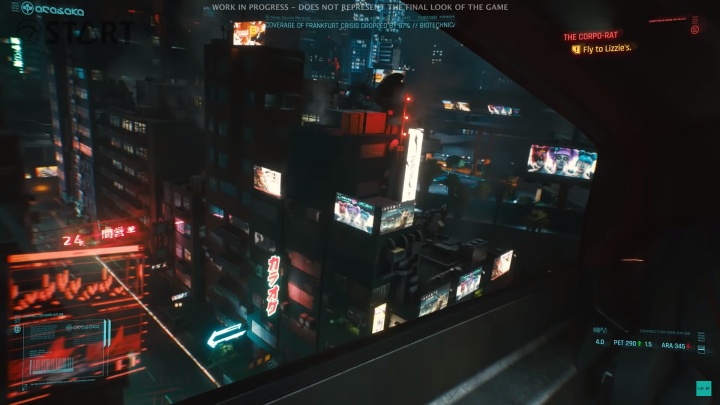 The Night City at night sure looks impressive. Source: Start

"What's Night City like? Is it everything they [the devs - editorial note] said it would be?"

The world available in the game has a unique atmosphere. What CD Projekt RED has created is amazing, Night City makes a very good impression. It's one of the most immersive and realistic cities designed for video games. It is "alive" and full of NPCs. The NPCs react differently to the player, depending on their role. It usually comes down to their nicknames, but it builds good atmosphere. At the same time, one has the impression that bystanders are not just artificial entities waiting to interact with the player, but really have their own "life" in this city.

Below we publish a recording created by the editorial staff of Start concerning Cyberpunk 2077: