The turn of August and September will be very hot for Xbox Game Pass subscribers. During this period, its library will be enriched with a lot of new games. Already yesterday, subscribers of this service received access to Microsoft Flight Simulator, another installment of the iconic series of flight simulators prepared by Asobo (currently available only on PC), and Spiritfarer - an unusual adventure game from Thunder Lotus Games, whose main character is a girl carrying the souls of the dead to the afterlife on her boat. And what's next? 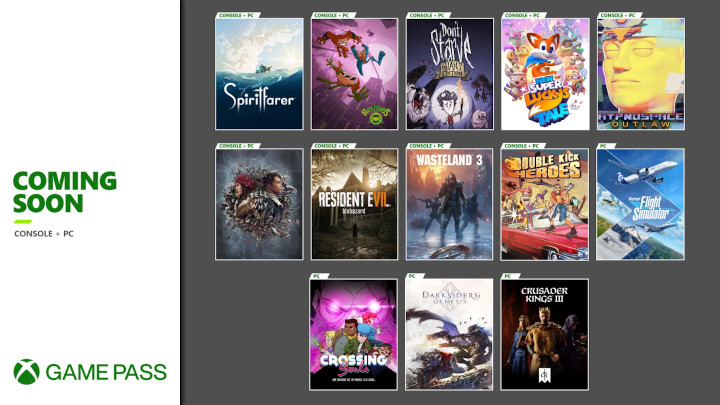 The end of the holidays promises to be interesting for Xbox Game Pass subscribers.

Below, you will find the full list of games that will appear in the Xbox Game Pass subscription library in the coming days, either solely on PC or also on the console. The most noteworthy games that will make their debut as part of the service on the day of their official launches can be pointed out. These include Crusader Kings III, Tell Me Why or Wasteland 3.

If someone is a subscriber to the Xbox Game Pass and would like to keep the aforementioned games, they can buy them. Subscribers are guaranteed a 20% discount in Microsoft's store.

Let's recall that the Game Pass subscription is available in three versions: on PCs, Xbox One family consoles and the Ultimate version combining the first two solutions. After paying for a monthly subscription, the suggested price of which is $4.99 (PC) or $9.99 (consoles), we get the possibility to download dozens of games included in the constantly updated library of new and slightly older titles, as well as a discount on shopping in the Microsoft Store. If you haven't used the Xbox Game Pass yet, you can buy the Ultimate subscription for as little as $1 for the first month (here).Game Pass subscribers also get all exclusive productions from Microsoft's in-house dev teams such as Ninja Theory and 343 Industries on the day of release.