June is a very good month for fans of Lara Croft  before E3 we received a new trailer for Rise of the Tomb Raider, during the event the first portion of gameplay was shown, and now, just a few days after the Los Angeles convention wrapped up, we can watch brand new gameplay material. A 14-minute video has been published online, showing some aspects of the production scheduled for a November release.

Rise of the Tomb Raider, the eleventh installment in the series that launched in the 90s, is the direct sequel to Tomb Raider from 2013. Once again, Crystal Dynamics took the reins of the production. This time, Lara Croft is sent to the snow-covered Siberia (although we visit other regions as well) in search of a town hiding the secret of immortality. The success of the games predecessor means that the developers are using the proven solutions, putting an emphasis on action combined with survival elements. Rise of the Tomb Raider will hit the shelves in November, but for some time the game will be available exclusively on Microsofts consoles.

The new gameplay fragment is a continuation of the material presented at E3  you can learn how Lara managed to escape unharmed from the ill-fated hike in the Siberian wilderness. The video also shows the simplified survival mechanics, such as collecting firewood and managing our refuge where we improve our equipment. We also get to see the quiet elimination of enemies  our feisty archaeologist has at her disposal a variety of options in this regard, from poison-spraying arrows to throwing lit gasoline cans. The most serious challenge presented in the video, however, is an extremely aggressive bear, which Lara confronts twice. You can see that after the success of the previous part of the game, Crystal Dynamics does not intend to radically change the formula of gameplay, so the new production lacks major innovations. But even without them, Rise of the Tomb Raider might turn out a really tasty morsel. Whether this happens, we will find out November 10 when the game debuts on Xbox and Xbox 360. Owners of other platforms will have to wait a little longer. 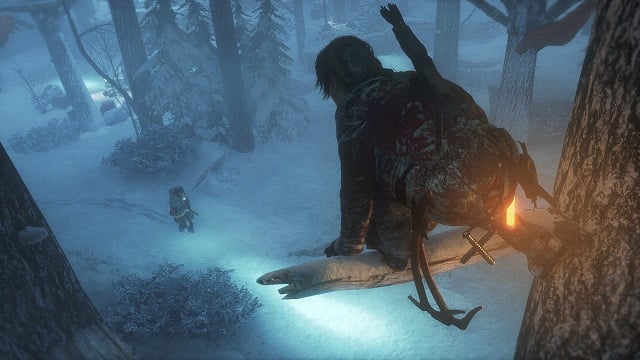 Lara jumps from tree to tree, and holds her own as good as any assassin.