Unexpectedly, Riot Games has announced the release of Ruined King: A League of Legends Story, which was announced in 2019. The studio did so during yesterday's livestream held in conjunction with Nintendo. Within several hours, the game attracted more than 14,000 players on Steam, and at the peak moment the gameplay was watched by 107,000 people on Twitch. At this point, more than 85% of reviews on Steam are positive, and the game was on the first place of Steam's bestseller list. 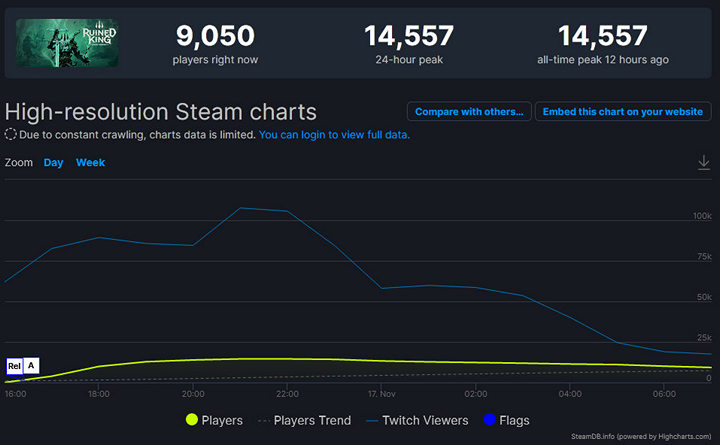 Players primarily liked the turn-based combat system and accessible storyline of Ruined King, a game set in the League of Legends universe. The latter enables us to easily explore the history of the world and the heroes of Runeterra for those who do not like Riot Games MOBAs, because they prefer solo games.

The game's visual layer is also praised, as it maintains the style known from League of Legends. The players also appreciated the low system requirements, which make the title run satisfactorily even on a proverbial "potato rig". However, the game is criticized for a large number of annoying bugs, one of which prevents some players from completing the tutorial. In addition, some are critical of the fishing mechanics in Ruined King which, in their opinion, is too simplified and resembles fishing from Battle Chasers: Nightwar. For both titles were created by Airship Syndicate.

Ruined King: A League of Legends Story was released on PC (Steam, Epic Games Store and GOG), PlayStation 4, Xbox One and Nintendo Switch. Next-gen versions of the game are coming soon and will be available as a free upgrade for Playstation 5 and as part of the Smart Delivery feature for Xbox Series X/S.

Survival Game Icarus is a Commercial Hit But a Technical Flop

Dragon Age 4 Unlikely to Appear at The Game Awards 2021