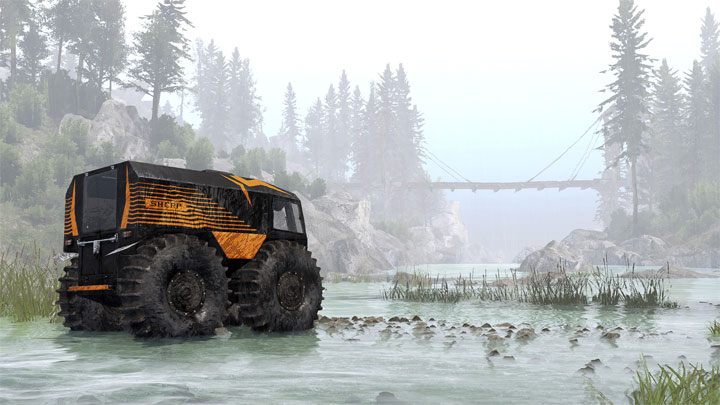 Despite being more than six years old, Spintires is still being developed.

The attention of fans of off-road truck simulators is now focused on SnowRunner, but in the meantime Spintires, the game that started the franchise, is also developing very nicely. The game has just received a major update and a paid DLC.

The expansion is called SHERP Ural Challenge and can be purchased on Steam for $3.99. It introduces two new vehicles in the form of N 4X4 ATV and ARK 10x10 ATV from the title manufacturer. The DLC also offers an additional map, modelled on Yugyd Va, the largest Russian national park, located in the so-called Northern Ural.

With the release of the DLC, the 1.6.0 update debuted, which brings many improvements to the game. The patch introduces much more realistic interactions with water and a completely new system simulating mud physics.

The patch has also added CTIS technology to some of the vehicles, enaling the driver to control the air pressure in individual wheels. A number of changes have also been made to control systems and vehicle behavior. Some of the textures and rain effects have also been improved. In addition, many technical errors have been fixed.

Spintires was released in 2014 and is only available on PC. Oovee Games subsequently sold a license to Focus Home Interactive, and Saber Interactive developed Spintires: MudRunner and this year's SnowRunner for this publisher.

Meanwhile Oovee Games focused on improving the original Spintires. Last year, the team released, among other things, a major update 1.3.3, which introduced new vehicles and the weather system, and in November we received the paid expansion called Chernobyl, offering a map showing the deserted area around the Chernobyl nuclear power plant.