GSC Game World abandoned the plan to release NFTs related to S.T.A.L.K.E.R. 2: Heart of Chernobyl. The withdrawal of the decision came very quickly - it was announced just a few dozen hours after the announcement.

Virtual items in the form of non-fungible tokens are gaining popularity recently. In the video game industry, the use of this technology was announced by Ubisoft, the creators of Dead by Daylight and Peter Molyneux. Each time it met with a very negative reaction from players, but did not result in a change of plans. The case of STALKER 2 is different - the developers listened to these voices and abandoned the idea. 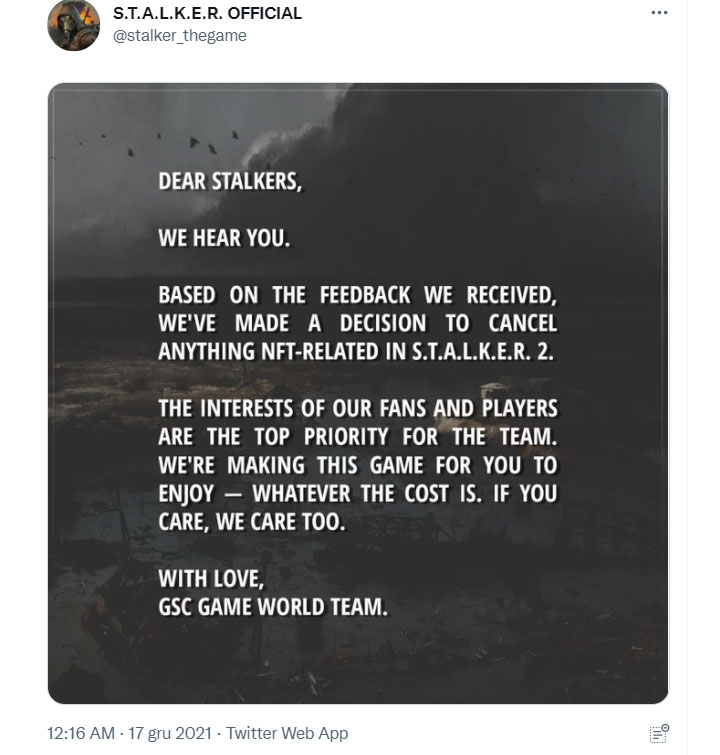 Even in this case, however, it took some time to change the decision. The day after the plans were announced GSC Game World tried to defend them, publishing an extensive message in which it was explained that the profits from NFTs will be used to feed the game's production budget. Fans, however, were not convinced by these arguments. The aforementioned post has already been removed, but a copy can easily be found online. In the end, players must have been so enraged that they forced the developers to completely abandon these plans.

The devs had an unusual idea for NFTs. Players were to get the opportunity to become an NPC in the game for a fee. Those interested would have to go to GSC Game World, where they would undergo a scanning procedure so that the creators could realistically model their appearance. Further plans included other types of non-fungible tokens.

STALKER 2 is coming to PC and Xbox Series X/S. The game will be released on April 28 next year. It will also be available on PC Game Pass and Xbox Game Pass subscriptions from day one.

The Witcher Season 2 Premieres on Netflix

Warno is the New RTS From Wargame Devs; Early Access Launch in January