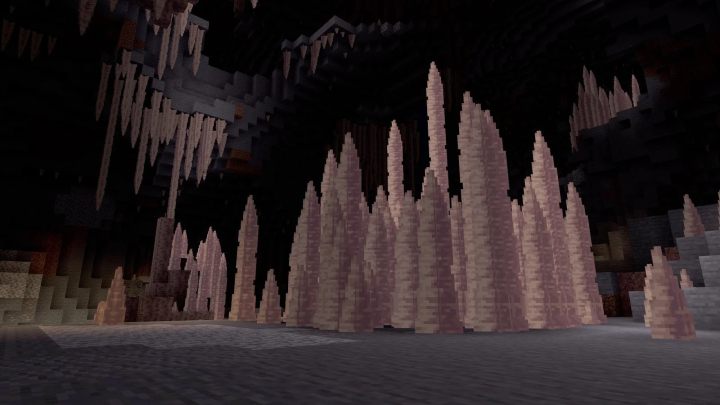 With the new update, stalagmites and stalactites will come to Minecraft.
IN A NUTSHELL:

On October 3, Minecraft Live 2020 took place, which should be noticed by all fans of the franchise developed by Mojang Studios. During the over two-hour-long presentation many planned novelties were shown. The future of the classic Minecraft looks very interesting and the game which will receive an impressive update called Caves and Cliffs and a new mob.

The developers have not forgotten about the spin-off titled Minecraft: Dungeons, the most interesting information about this game has been gathered for you here.

Caves and Cliffs Update is the biggest Minecraft update in years.

The players have finally seen the announcement of the improvements they have been asking for for many years. With the latest update, caves and mountains will be fundamentally changed, as the title of the update suggests. This will manifest itself, among others, in the mining system, climbing etc. Unfortunately, due to the large amount of work on the aforementioned content, the novelties will not launch before summer 2021.

Fans have chosen a new mob for Minecraft

During the event, a vote was held so that the players could choose a new mob to join the known creatures. There were three candidates for this place: Moobloom, Iceologer and Glow Squid. Eventually, the last one of them won the majority of the community's votes.

One would like to say that Minecraft teaches by entertaining and entertains by teaching. This is certainly the case with Minecraft: Education Edition, a dedicated version developed for education purposes. Teachers and students can use it to develop skills and creative thinking. Maybe now they will be able to win something too. All thanks to the first ever international tournament - Global Build Championship.

The event is aimed at the students who will face a creative task. A team of up to 3 people will have to prepare a space where people and animals can coexist freely. Teachers and tutors can register their pupils and submit their projects via the official website, registration will last until November 6. The winners will be selected on December 4.

It is also worth mentioning that lessons on racial equality and civil rights movements will come to Minecraft: Education Edition.

Minecraft has over 136 million active users per month

Mojang's game is not slowing down, the devs have boasted further statistics on active users. Admittedly, they look really impressive. More than 136 million players are playing the game every month, the result was obviously influenced by the coronavirus.

Developers revealed that since the beginning of the pandemic there has been an up to 90% increase in activity in multiplayer mode. Even the inhabitants of Antarctica and the Vatican were running Minecraft. As we can see, COVID-19 and the associated lockdown contributed to a huge jump in popularity of the game.