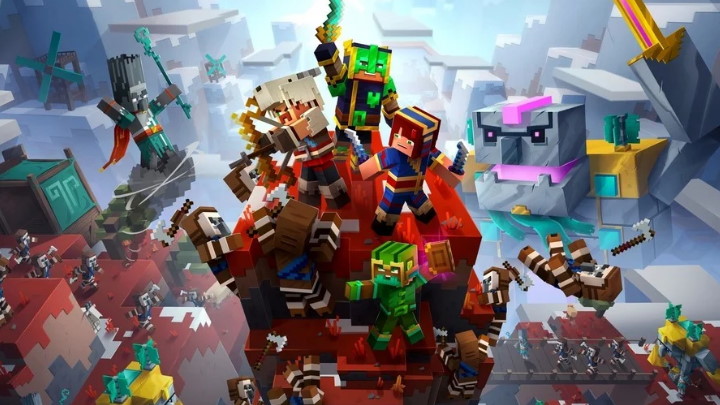 The world of Minecraft will continue to develop for a long time to come.
IN A NUTSHELL:

Minecraft: Dungeons has months full of attractions ahead of it. During the Minecraft Live 2020 event held yesterday, upcoming DLCs for the game were revealed. But before we move on to additional content - the most important information. Minecraft: Dungeons will receive full cross play support so that PS4, PC, Xbox One and Nintendo Switch owners can play together. The update will be released by the end of this year.

In December, another expansion will appear. Howling Peak will add a new island to Minecraft: Dungeons with more locations, new monsters and variations of existing ones, another pack of equipment, items and extras. A free bugfixing update will be released together with the DLC to improve the balance of the game and offer new features to all players:

Mojang has no intention of giving up support after the December DLC. Work on further additions is already underway. Not much information was revealed about them. All we know is that we will visit new locations in The Abyss, The End and we will go to the Underwater biome. Each expansion will be accompanied by a smaller update adding new items, increasing the difficulty level, and improving the game.

Mojang's announcements made during Minecraft Live 2020 show that the studio is satisfied with the popularity of Minecraft: Dungeons. The support that the title will receive can only please the players. After a rather poor start, the game is becoming an increasingly attractive morsel. We keep our fingers crossed for an imminent announcement of the version for the next-gen consoles.