I bring bad news for the economic strategy game fans who have been eagerly waiting for The Settlers, to be released on March 17. Today, two weeks before the date, Ubisoft Blue Byte announced that the title will suffer a third delay. How big? So far we do not know. 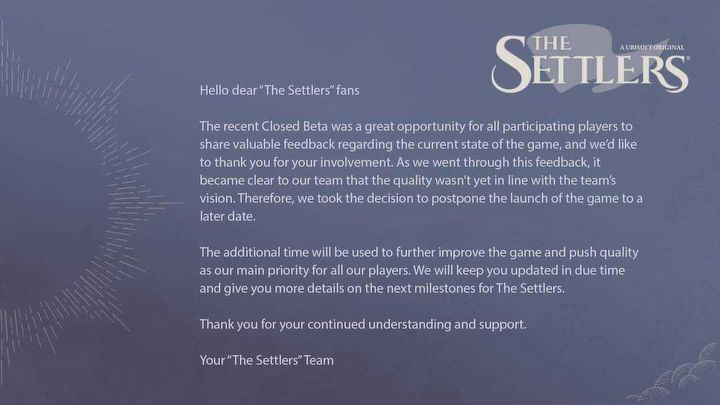 Reason for the delay

The reason for another delay is the negative feedback from the people who took part in the closed beta tests of the game. The developer argues that after getting to know them, the team realized that the game's current condition is inconsistent with the vision that guided its creation. As a result, the title would not meet the expectations of the community.

What's next for The Settlers?

Additional, unspecified time will be devoted to making the necessary improvements and increasing the quality of the game. More information - including a new release date - is expected at some unspecified time.

The desire to refine The Settlers should, of course, be welcomed. However, it seems astonishing that the canceled release date (you can read about previous delays here and here) was announced on January 13, 2022 - after industry media representatives had a chance to test the game. Their opinions were full of doubt, which should have been considered a warning sign of sorts.

Nevertheless, a new release date was announced - only for it to be canceled, as it turns out. Let's hope that all this confusion will do the game good and it won't end up in development hell.

Doom 2 Gets New Level From John Romero; Proceeds Go to Victims of War in Ukraine

Farming Simulator 22 Will Get Free Precision Farming DLC in April

Doom 2 Gets New Level From John Romero; Proceeds Go to Victims of War in Ukraine

Changes to Healing System in LoL

New Faction in Dune: Spice Wars May be the Fremen