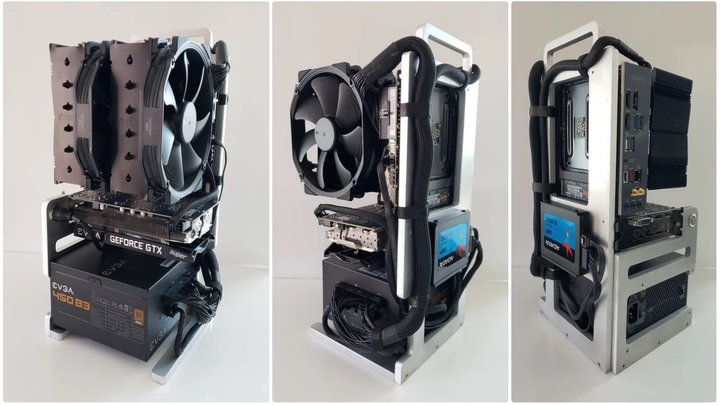 In our opinion, this casing looks more like a hanger than a full-fledged box.

The Internet shows that there is no need to assemble computers in a dedicated case. All you need is a little creativity and knowledge. Recently we wrote about how one of the American youtubers built a PC in the casing of a broken Nintendo GameCube console. This time one of the Instractables users decided to share his work. The author describes the work as an open, integral frame, which can be used to easily replace components, making the casing a kind of hand-made Benchtable. The frame was cut out with a CNC machine and all additional elements were prepared on a 3D printer.

What about the components?

The idea of the creator, user known as Honus, was to create a platform for 3D modeling, CAD and photo editing. It was not supposed to be a gaming computer, because, as he admits, it plays occasionally. He used Gigabyte X570 Aorus Pro as a base, choosing 16 GB of RAM (2x 8 GB) from G.Skill and EVGA GTX 1660 Super GPU. The heart of the computer is a Ryzen 7 2700, and all this was powered by a used EVGA 450W power supply. You can find out more about the specs in the creator's post.

The author has provided a full design, with instructions and all the necessary files, so that everyone can make the same case. However, to create it we will need a CNC machine and a 3D printer.