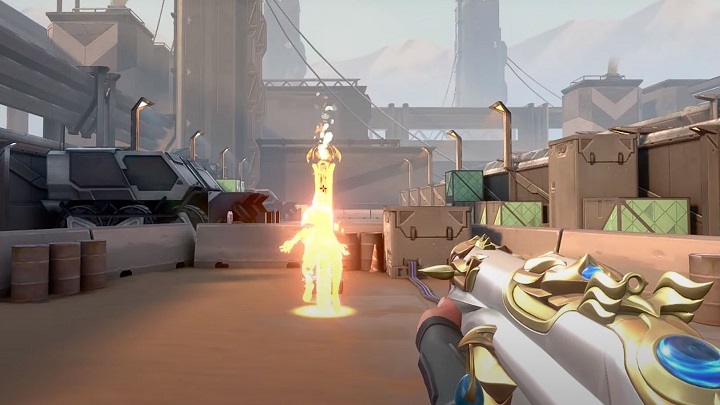 The most expensive weapons provide additional visuals effects after the elimination of an opponent.
IN A NUTSHELL:

You're surely aware of how free online games earn their money. Usually, in such titles, you can buy various kinds of cosmetic items (such as character skins, weapons, or other equipment). It is no different for Valorant. Apart from the recent industry standard, the season pass, Riot's shooter offers weapon skins, including themed sets containing several items. However, that's exactly what the players have been complaining about for some time now.

The complaints that have been made about cosmetic items are mainly about their exorbitant price. The latest set (shown in the graphics below) contains five weapon skins, including one for a knife, and costs $71 (exactly 7100 Valorant Points).

Despite a pretty pleasant design and the additional visual effects it offers, for many players it's far too much, especially because to have this amount of currency, we need to buy at least two point bundles. For the same price, we could buy a brand new AAA title (and get some change.) The entry on Reddit, which touched upon the topic, was liked by almost 15 thousand users, and commented on by over 2.5 thousand, which can only confirm the scale of the problem.

However, as another user noted, the developers are unlikely to do anything about it. The fact that some players complain about the prices of cosmetic items does not mean that nobody is buying them. These probably sell so well that their distribution is worth leaving things as they are now. The aforementioned skin set is not the first one in the game (e.g. Hypebeast was available earlier), and complains about item prices have already appeared even during Valorant's closed beta. As you can see, they did not bring the intended effect. However, it's worth to bear in mind that excessive prices of skins are unfortunately quite a common "problem" on the online game market.

Valorant is officially available for free only for PC users from June 2. With the game's official release, a new character, map and game mode has been added to the game. Not so long ago we wrote about the fact that cheaters banned during closed game's tests still can't play and about problems with unoptimized matchmaking.