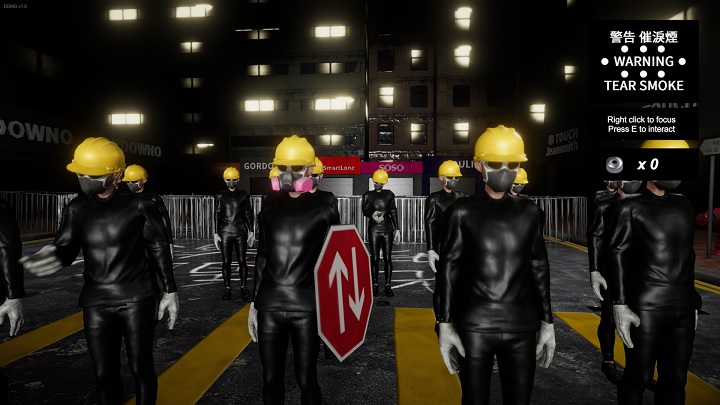 In Liberate Hong Kong, we take on the role of a nameless protester.

Video games seem to have become a permanent element in the history of Hong Kong protests. First, thanks to blitzchung, who supported the protesters in an interview after winning the Hearthstone tournament, and then being suspended by Blizzard for expressing his views on the developer's official channel. Later, thanks to the whole community, which reacted with a boycott. Now, as Gizmodo points out, due to independent, niche developers who create games that tell the story of the on-going struggle of Hong Kong's residents. Educating, engaged and, as they themselves admit, partially testing the comfort zone of large corporations related to the industry. The initial results of the test have already been given to the creators. Valve, with its Steam platform, takes so long to think about the answers to the questions that its's about to fail the exam.

Authors of two games: Liberate Hong Kong and Karma, wanted to put them on Steam, but this requires prior content verificationt, which takes several days. And if you've snooped around Steam for some time, you know that the requirements to get in couldn't possibly be very high. And, indeed, they are not - you can read about them in Steam's blog post:

"If you're a player, we shouldn't be choosing for you what content you can or can't buy. If you're a developer, we shouldn't be choosing what content you're allowed to create. Those choices should be yours to make. Our role should be to provide systems and tools to support your efforts to make these choices for yourself, and to help you do it in a way that makes you feel comfortable. With that principle in mind, we've decided that the right approach is to allow everything onto the Steam Store, except for things that we decide are illegal, or straight up trolling."

Meanwhile, according to Gizmodo, Valve delays the decision to put the aforementioned games in its shop. Karma is already in, but it still can't be bought. The creators decided to release it independently here, it costs (at least) 1.99 dollars. The short dystopian story going 70 years into the future is, as we read in the description, inspired by the sadness and misfortune of the protesters in Hong Kong. The game's verification period began on October 6 and continues to this day. Why? Controversial and potentially illegal content. Dev team member Arte Lee expressed his disappointment with the situation, as there are many political games related to real events and people in the store, while Karma is supposed to be a fictional item describing an unspecified dystopian future.

The devs of the second title, Liberate Hong Kong, which was not intended to be an entertainment, but part of the protest from the start, have been waiting for verification since October 18. They did not receive any answers to their questions about the status of the game. They assumed, however, that just by putting Valve before such a difficult decision they could contribute to making the situation in Hong Kong public again. In an interview for Gizmodo, one of the developers, Tom Chan, admits:

"We understand that Steam has some concerns about losses on the Chinese market. We hope, however, that we will at least be able to talk about it [with the platform's representative - editorial note]."

The devs sent an open letter to Valve, in which they not only ask for the reasons for the delay, but also point out that it will not come as a surprise to the free world that another large company chooses compromise when it comes to human rights, freedom and democracy, and turns to political censorship to meet the expectations of the powerful economy of the regime, which is the People's Republic of China.

The creators of both games want to transfer all their sales revenues to the protesters through specific foundations.

The game was created to educate and inform people from outside Hong Kong about the everyday life of protesters. The simple gameplay boils down to throwing gas cans (or Winnie the Poohs) at the police and avoiding bullets fired by the force. Usually it does not last more than 10 minutes - a protester ends up either arrested or shot. In the background you can hear authentic protest recordings. Liberate Hong Kong had its launch on PC and VR in November. Earlier a copy was sent to Ng Wai Chung, whom you may know under the pseudonym blitzchung, who streamed an hour's play on his Twitch channel. The stream was watched by 14,000 people.

The strong statement from the devs' letter was motivated by facts, because Valve, through its partner Perfect World (oh, the irony), is planning its official presence in China under the name Zhengqi Pingtai (literally Steam Platform). It should be noted that it will be a platform completely independent of the one we use. And what about the platform's unofficial absence? It is estimated that Steam, as we know it, has over 30 million users in China.

If the games do not go through the (apparently) demanding Steam filters, it will not be the first such situation in the industry - in October, the mobile game The Revolution of Our Times, also speaking in favor of the protesters, disappeared from Google Play. The removal of the title caused great dissatisfaction even among Google employees themselves. 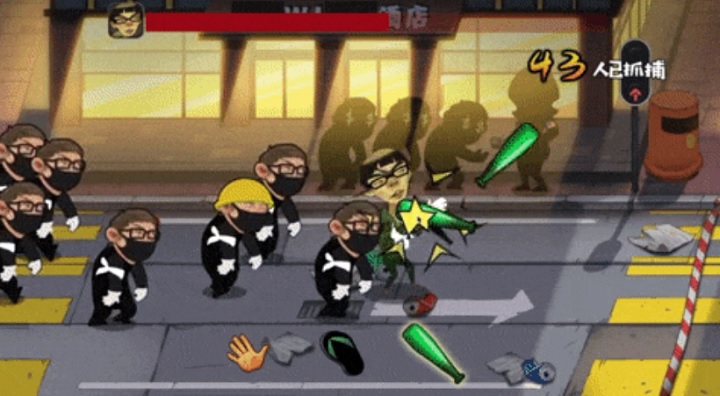 Scene from Everyone Hit the Traitors.

The strong position of games in the whole dispute between Hong Kong and China is evidenced by the fact that the Republic has already released its own game touching (or rather whacking) on the subject. Everyone Hit the Traitors, is a quite nasty piece of propaganda and caricature game requiring the player to beat the protesters and pro-democracy activists. The item is available as a browser game, but forgive me for not giving its adress here. You can find it on your own, if you wish, but it is not something worth of having its numbers and statistics pumped up (and I wouldn't like to contribute to that either).

The conflict made the games part of the political discussion and playing them, a part of choosing a side. Have large corporations already reached the point where the desire to earn money both "in the West", and in China is slowly becoming irreconcilable?