NeocoreGames, known mainly from the The Incredible Adventures of Van Helsing series and Warhammer 40,000: Inquisitor - Martyr, presented its next work to the world. The game in question is a tactical RPG, another installment of the King Arthur series, created back in 2009 and titled King Arthur: Knight's Tale. The game, which is reminiscent of the modern XCOM series, will launch on PCs in early 2021, and will later be released on PlayStation 5 and Xbox Series X/S.

The devs have begun a fundraiser on Kickstarter to raise $149,997. Due to the fact that this decision was supported by the desire to gather a community of fans around the project, and only then - to raise funds for additional elements of the game (via Eurogamer) - the title will be released regardless of the outcome of the crowdfunding campaign.

Before we move on to discuss the content of this project, let's take a look at its first trailer.

The main character of King Arthur: Knight's Tale will be Mordred, who managed to kill King Arthur, but also took a fatal blow during the struggle. The ruler was transferred to Avalon by the Lady of the Lake, and the pain that consumed him after losing his previous life changed him beyond recognition. The king became a leader of a dark army and began to subjugate Avalon, turning it into a land of nightmares. Then, The Lady of the Lakes decided to bring Mordred back to life as well, to whose hands she placed the task of dealing with Arthur... or what he became after being taken to Avalon, once and for all .

King Arthur: Knight's Tale will give us an extensive map, for which the seven factions will fight. We'll find more than fifty points of interest on the map, including story quests and side missions taking us to a variety of places, such as dense forests, gloomy swamps and dark undergrounds. Moreover, on our shoulders will rest the task of expanding the Camelot Castle, which is our command centre and starting point. We will improve the fortress by erecting various structures within it to unlock new improvements.

Our tasks will often be interfered with by our opponents - from common mooks, available in over fifty types, to ten bosses. We'll deal with them in turn-based battles. During the clashes, it will be necessary to display a knack for tactics, properly place units, and make use of their individual abilities. Mordred will not be alone in his quest; throughout the journey, he will be joined by more than thirty heroes representing five professions, which can be developed as they progress, unlocking new useful abilities.

In addition to taking them on their own missions, warriors can also be sent to carry out individual tasks. This will not be easy as the characters will be able to die (permanently) or suffer heavy wounds, which will take time to heal. Besides, their loyalty will not be certain - our actions will be constantly observed and judged, and if we fail to meet their expectations, they will even be able to switch sides. The same is to apply to their relations with the other members of our team so that conflicts between them will be the order of the day. The choices we make will also influence the course of the plot and the final shape that the land of Avalon will take. 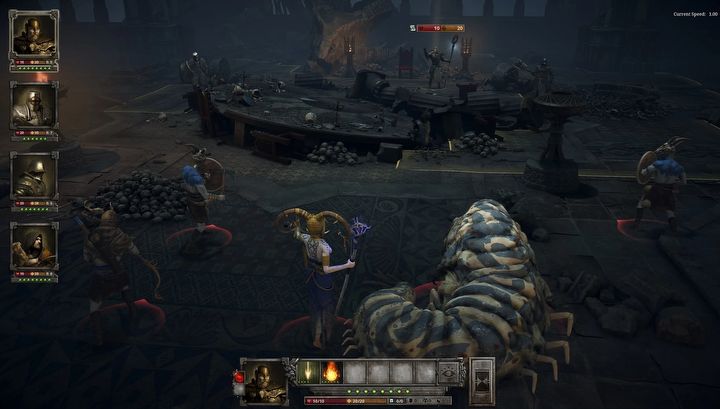 Finally, it is worth adding that the developers are announcing an extended endgame phase. Completing the main story of King Arthur: Knight's Tale will unlock access to various challenges, such as random tasks or clashes with powerful bosses. If we will complete them, we will get access to valuable prizes in return.