Games are not only about graphics, although we must admit that attractive visuals can really sell you on a given title, and sometimes even be crucial to its popularity. It happens, however, that they do not go hand-in-hand with compelling gameplay. A feast for the eyes, but the mind, instead of enjoying it, dreams about more gameplay-oriented positions.

The reasons for this can be anything from repetition, to low difficulty, to a non-engaging story or complete lack thereof. Consequently, different games can fall into this category. For some players, these will be simulators of all kinds. Others will get tired of lengthy RPGs, others of racing games, and there will certainly be players who yawn regularly during "action-packed" slashers.

Below, you will find ten fresh games that I find particularly mundane. Beautiful, but boring. Let's get started.

The original April 2022 version of this article has been updated with two new games on pages nine and ten.

As for the remaining games, I stand by my opinion in each case. In the meantime, I even gave Immortals: Fenyx Rising a second chance, but just like the first time, I ended up falling asleep in front of the TV...

Oh, Ubisoft – if only Ubisoft devoted as much time to creating great content as it does creating just content, it would be one of my favorite games. And ever since I've grown very tired of Assassin's Creed: Odyssey, I basically had no contact with other productions from the studio. With one small exception, known under a not-so-catchy title – Immortals: Fenyx Rising.

I reached for this game because it appeared as a typical Ubi production, just without contemporary threads, which in the latest installments was the exact opposite of interesting. Additionally, I was was really excited about Greek mythology. Ultimately, however, the money invested, as well as my detailed plan for having fun went down the drain. 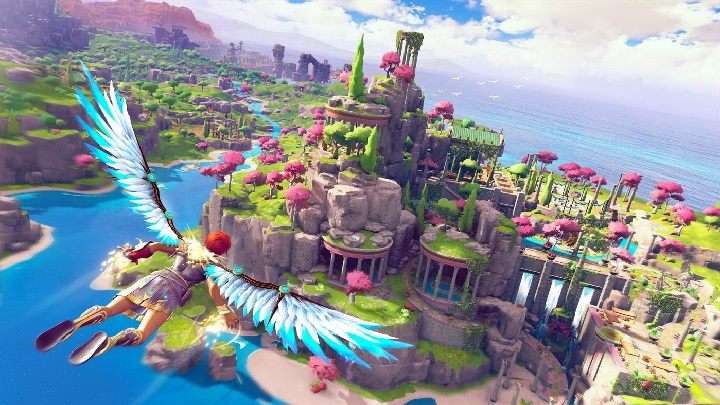 It's a pity that the initial delight wears off so quickly.

The beginning of the adventure. The Fenyx I created – in a rather limited character creator, let's add – was bearable. Nevertheless, although the protagonist became fun fairly quickly, the game didn't really spread wings. Ubisoft wanted their Zelda: Breath of the Wild, but they clearly didn't understand what made the Nintendo production such a phenomenon. Instead of thinking about exactly that, the developer thoughtlessly copied most of the mechanics, and the world map was sprinkled with dozens, if not hundreds, of markers so typical of Ubi games, which – horrifyingly – you have to locate yourself.

The infantile plot did not allow me to delve into the story, and the arduous exploration, consisting in unreflective ticking off subsequent points, bored me after just a few hours. The only thing I found reasonably engaging were fights with more difficult opponents, especially bosses, but in the long run, that was not enough for me to make it to the end credits. But the graphics? They were awesome! I was taking dozens of screenshots just because I loved the way it looked so much. The problem was that I would really want to complete the game – I could listen to the great soundtrack by Gareth Coker on Spotify for hours.