Unfortunately, the game that many people raved about didn't do it for me either. Journey seemed to be one of the few exclusive indie titles on PlayStation really worth knowing. I never had a PS3, so I was tempted to buy it only after getting a PS4. I bought it, it sucked me in, I explored it (even completed) and forgot about it (well, sort of). It was a find-flirt-forget kind of affair.

What's more, I completely did not understand the delights of this title. Yes, from the audiovisual point of view, it was really charming. There even is a deeper message in it. However, I have the impression that all the people who take Journey's message to a pedestal do it more because they'd like it to be so, than because the game really is so amazing. For me, it was a simple, symbolic story that – luckily – came to an end after about three hours. Indeed. Gameplay in Journey, although boring and repetitive, didn't get me tired in such a short time. 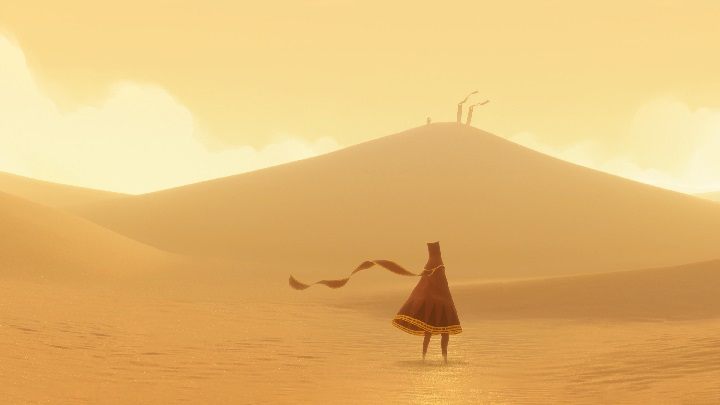 You stand alone in the middle of the world, and around... nothing to do...

I don't know, maybe my negative reception of this game derived from the fact that, at the beginning of the journey, I knew one of its greatest secrets. Of course, I mean the identity of characters similar to ours that we meet in the course of the game. In case you haven't had any contact with Journey, I'm not revealing what's that all about. People who do know this can, however, judge the importance of this information.

Or maybe I just cannot appreciate the symbolism or the message of simple, more artistic games? Although Celeste and Gris, published in the following years, captivated me with their stories much more. These productions, however, had an idea for themselves, which Journey was lacking a bit. Well, unless it was the presentation of an original, stylistically interesting world.