It's one thing to create a game with a good storyline and addictive gameplay. Skillfully combining these two elements is by far more difficult and on a higher level. Combining them in such an inseparable way that both the player and the character they control face similar difficulties and encounter the same problems.

We also applaud games that can evoke such strong emotions in players that they have to take a break from the game, because they are not having fun or are pushing themselves to reach the ending. On the same level are games whose plot is so skillfully executed that its final twist surprises everyone without exception, and after watching the end credits, one wants to immediately restart the adventure to discover the clues left by the developers that connect the story into a cohesive whole.

What do all the aforementioned examples have in common? The fact that in order for them to succeed, the developers have to come up with clever narrative tricks. Sometimes they are simply the result of the authors' creativity, other times they are the outcome of attempting to overcome technological limitations. Regardless of the intentions or lack thereof, the final result is laudable. Here are eight video games that really caught me off guard with their narrative techniques.

Writing this article required analyzing important plot points from the games it lists. Hence, it was impossible to avoid minor or even major spoilers. If you'd like to avoid them, below you will find a sequential list of games that appear in this text - just skip the page in question.

Let's start with the inconspicuous Twelve Minutes. Why do I call the game inconspicuous when it features voices of such well-known movie actors as James McAvoy, Daisy Ridley, and Willem Dafoe? It's because this story-driven title offers a mediocre plot and its repetitive gameplay can become tiresome after two hours. Still, this title delighted me with its carefully hidden immersion.

As you continue playing Twelve Minutes, gradually discovering the nuances of the story, it brings you - seemingly - closer to the ending and breaking out of the titular twelve-minute time loop. The protagonist's reactions seem to confirm this, as does the game itself, which offers more and more plot shortcuts that allow you to achieve a desired effect faster or check out certain alternative stories without having to repeat all the steps required to reach said advanced stages. Just moments away before achieving our final goal and when the credits seem just around the corner, the game plays a trick on us. 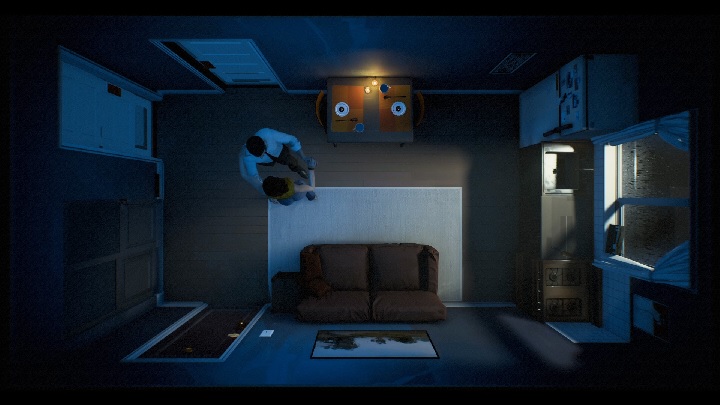 It turns out that there's more to be discovered, although it seemed as if we already knew the truth. So, along with the protagonist, we start looking for what we might have missed. For a long time, it feels like you're banging your head against a wall in frustration. At least that's how it was with me. I wanted to finish the game - just like the protagonist was trying to break out of the time loop in which they were stuck - but I couldn't.

So I started trying the weirdest things, hoping one of them would work. Finally, it did. And although the rest of the plot of Twelve Minutes turned out to be quite bizarre, finally watching the ending credits, I realized that the narrative trick used by the developers worked perfectly. We're stuck in a loop along with the protagonist, which forces us both to look for a way out. Maybe this realisation doesn't make up for the second-rate storyline, but at least it makes the game memorable.