The end of the year 2019 is slowly approaching. Several good video games have been released in the last twelve months, both on PCs and consoles. The situation looks pretty similar in the case of mobile devices – once again, statistical reports indicate that the value of global mobile device market has increased and tends to grow in an accelerating rate. It's becoming very difficult to ignore smartphones and anybody can notice that even the most obdurate opponents of mobile platforms are gradually warming to their potential. This is not surprising, as more titles known from our larger display screens, are being converted to mobile platforms.

In the following list you will find twelve new mobile games that in our opinion are worth a try. We have tried to select the most popular mobile games, which at the same time offer unique features or seem to be charming gems. However, the problem is that various game designers have released thousands of interesting mobile titles in 2019, so it was quite a challenge to choose and recommend just a bunch of cool apps.

The list is not complete. A lot of decent mobile games and apps have been released in 2019 – it's impossible to name them all. Thus, if you think that some titles deserve more attention, then post a comment and let us know!

In the text you will also find paid mobile games. Some of them cost a lot. However, you should remember about one small thing – Google Play offers special sales like any other stores or platforms. Therefore, it is worth to regularly check the current offer of the store, whether any cool paid mobile app has been discounted or even made available for free.

Archero – archer versus the rest of the world 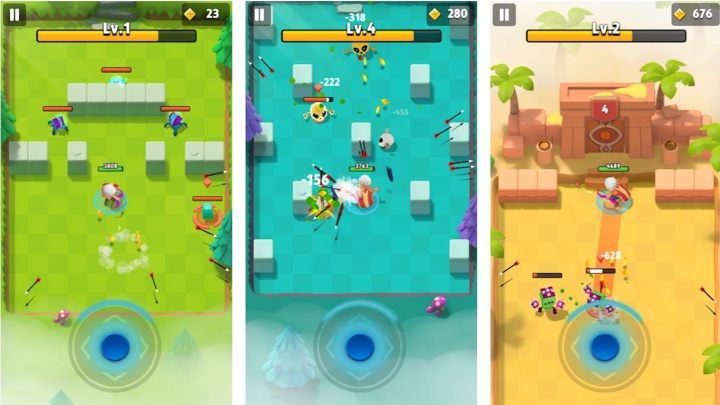 The charm lies in simplicity and this principle has been used well by the designers of Archero, which is a straightforward but addictive and satisfying game. You play as an archer who has to eliminate opponents on subsequent levels. The arrows are being shot automatically, but only when you stand still. These moments are rather short, because you have to run around the level all the time in order to avoid enemies and their projectiles. During the process you can collect upgrades that have a direct impact on your character and often significantly modify combat mechanics. At least until the first death, when you will lose all your skills.

In Archero, player's character has only one life available. If your hero gets killed, then you have to restart the game from a scratch. Almost, because you can do a lot of stuff between matches – buy buffs and boosts for score points, upgrade your equipment or even change your hero, which makes it much easier to start. The gameplay is not that easy at it may seem – it requires a lot of dexterity and a tactical mindset, as every move should be properly planned. Such simple game mechanics make Archero a demanding title which may force you to rack your brain over it.