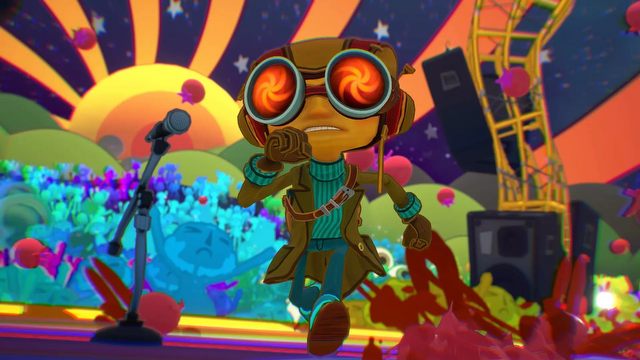 What is Psychonauts 2 about?

Psychonauts 2 is a long-awaited continuation of the platformer from 2005, again created by Tim Schafer himself – the author of such cult games as Grim Fandango or Brutal Legend. We play the role of Razputin Aquato, a member of the international spy organization Psychonauts, wielding psychic superpowers. In the sequel, he has to face a traitor in the ranks of this organization, explain the strange behavior of our boss, who, after being saved from a kidnapping, doesn't resemble himself, and to defeat the arch enemy, Maligula.

We learn the history in the second part of Psychonauts by completing the classic platform levels, where exploration and logic puzzles are mixed with combat sequences. Razputin can use various psychic abilities, including telepathy, telekinesis and a time slowdown thing. It all adds up to extremely varied stages, in which there's always something going on, and in addition to dexterity and reflexes, you sometimes have to move your head as well.

Psychonauts 2 has been hailed as one of the best games of 2021, not only by reviewers, but also by players themselves. The well-developed characters, humor and captivating plot are especially delightful. Comic-book graphics have its own unique artistic style and despite the simplifications, there is nothing to be ashamed of when compared to modern games. Despite the relaxed atmosphere, the creators ingeniously and seriously approached the topic of mental disorders, which occurs throughout the game. The second part of Psychonauts is simply the perfect sequel, not allowing you to unglue yourself from the fun all the way through. It was worth waiting 16 years!