Okay, cool, we've given some space to games not necessarily related to the CD Project RED, but now it's time for the Polish hegemon, namely The Witcher. This one has become an inseparable part of the world of Cyberpunk to such an extent that at least once every few hours of playing I pointed my finger at the screen, speaking with pride: "Oh, it's from "The Witcher"! Wow!".

School of the Wolf 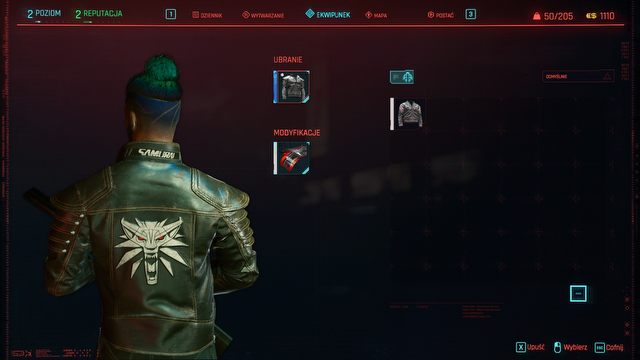 The first time I shouted something like that was even before starting the game, so quite early. I bought the game on GOG, thus I got a couple of cosmetic items to diversify the initial outfit and armament of my V. In my closet I had a tasteful jacket and a School of the Wolf T-shirt waiting for me, where I could feel like a real boss in the city. Oh, I would have forgotten about the Black Unicorn, a katana modeled on a steel sword, with the help of which we were able to kill the enemies in Wild Hunt. It also workes well in Night City, although only during the first hours of one's playthrough.

What The Witcher 3 and Cyberpunk 2077 have in common? Equally funny and annoying "steeds. Although horses have had to give way to cars as a result of absolute technological progress, they respond to the call with the same joyful bug, appearing for example inside an object or hitting us during sudden braking. This AI is a hell of a trickster. 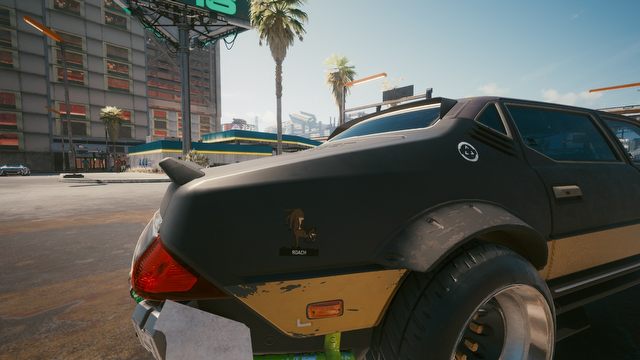 Nevertheless, Roach is present throughout the game, only to simply change its morphological form from an animal to a machine. Why? Well, take a look at the sticker on the back of the right-hand side of the Hella EC-D I360  V's first car. You will immediately recognize the horse, even despite its cartoon-like head. 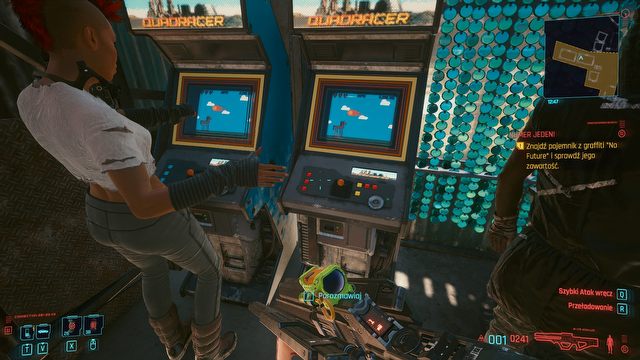 In Cyberpunk, Roach also became the main character of a fictional arcade game called Roach Race. In it, the horse rushes through pixels, avoiding flying griffins on her the way, and it's hard not to associate this gameplay mechanic with the one offered by Dinosaur Game, which is a charming Google production, which we play usually when we want to relax after a sudden Internet failure. You will find this easter egg in many places on the map, I first encountered it on the Kabuki coast.

Ciri on the cover 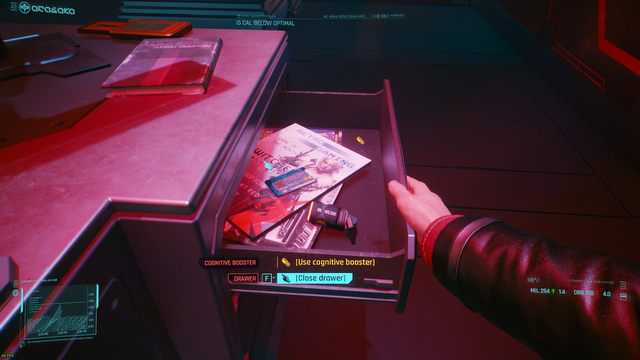 Until the premiere itself, people were wondering if there was a chance to see an NPC inspired by Ciri in the game. And although noone like that appeared (or has not yet been found), CD Projekt devs did not completely forget about Swallow, making her at least the heroine of the cover of the "Retro Gaming" magazine, which can be found at the very beginning of the game in V's office ( provided you choose to play as a corpo). This means that The Witcher 3: Wild Huntfunctions as a video game in the world of Cyberpunk . And it's one that has a few dozen years on its neck, so it's a real old one from some generation that is not important for connoisseur geeks. 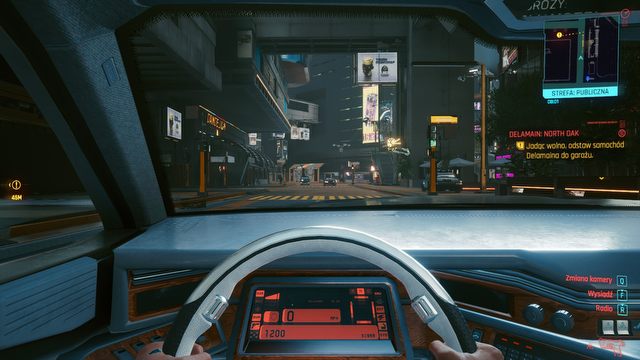 Let's return once again to the job to find Delamain's cabs, but this time to the one where we have to escort a highly depressing car spinning senselessly around a traffic circle in North Oak. Driving this car requires delicacy and not exceeding a certain speed, because it terrifies the mentally broken artificial intelligence too much. At some point, the vehicle stops spontaneously as a result of a panic attack, and the annoyed V comments the whole situation with "Damn it!". The only rightful curseword, befitting Geralt himself

The Beast of Beauclair

In many corners of Night City you will also find really talented guitarists who play nice songs and at the same time really pull the strings, which strengthens the realism of the scenes. Once in a while, when passing by such a street artist, you can hear a familiar theme, which is an interpretation of a piece from The Witcher 3: Blood and Wine entitled The Beast of Beauclair (the author of the original is Marcin Przyby³owicz  a composer who also created part of the soundtrack for Cyberpunk 2077). 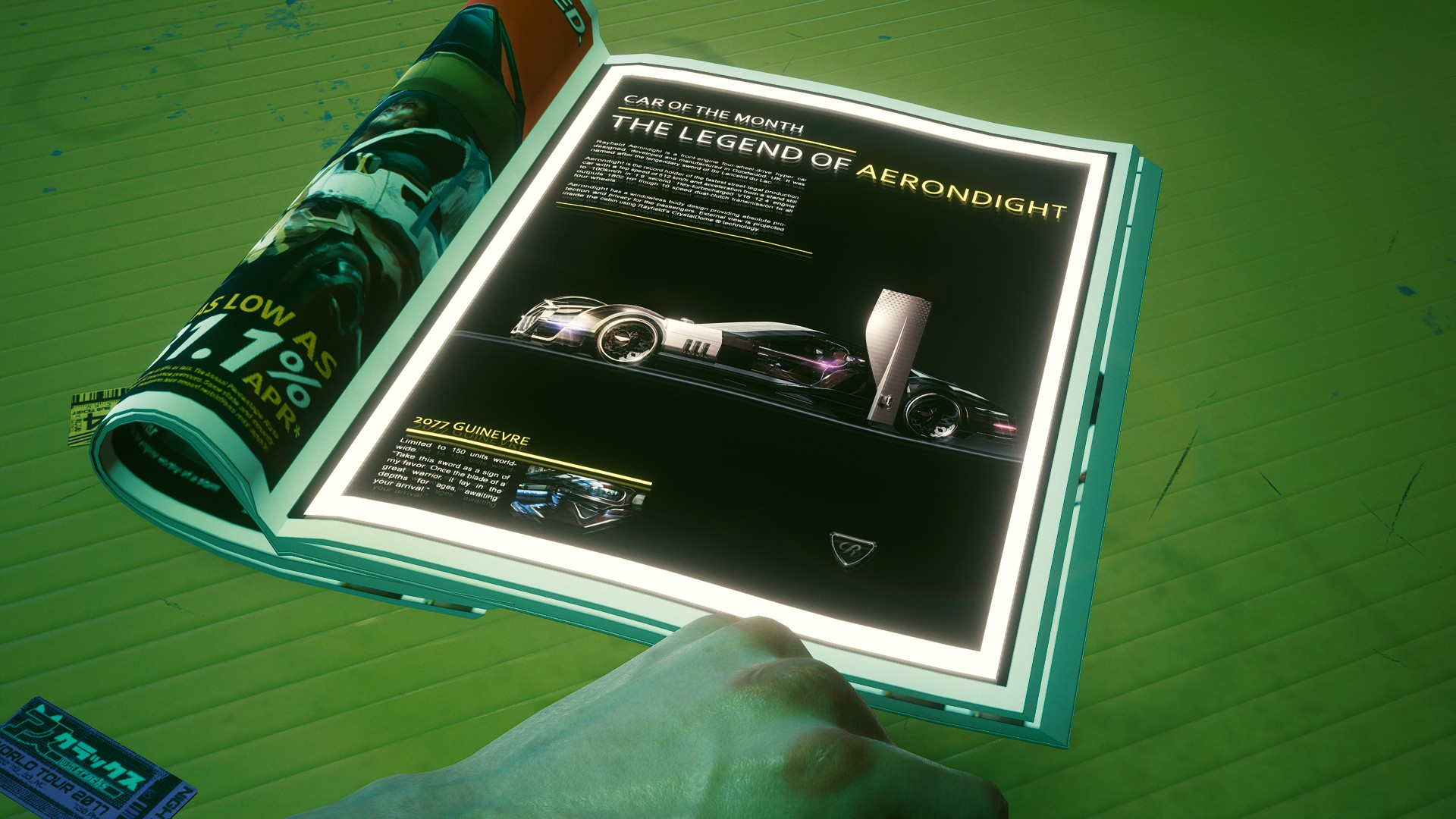 The Aerondight is the most expensive car in Cyberpunk 2077. At the same time it is a name well known from the Witcher. This was the sword we could find in the first Witcher and in the Blood and Wine expansion to The Witcher 3. In the latter, the protagonist gets it from the Lady of the Lake. In the magazine you see above, a quote from this lady appears in the bottom left corner of the page. However, let us tell you straight away that the first sword to bear this name was the one wielded by Lancelot, one of the Knights of the Round Table.