Many of you may have never played Diablo II, and Resurrected may be your first encounter with the Lord of Terror. On the other hand, slightly older players, who enjoined the game a few years after its release, may not realize what the production looked like right after it launched. On the occasion of the release of the game's remaster, we've gathered some facts and trivia to make you even more excited about entering the world of Sanctuary, which became available on September 23 this year!

Knowledge is power (we can use)

A few words about items

They say "grasp all, lose all," but if it doesn't affect other players negatively, it's worth checking out some tips and tricks to outsmart the game and make the gameplay a little easier, or save a few seconds by skipping unnecessary actions.

This may come as a bit of a downer, but Diablo servers are sometimes full of players want to hunt and hurt inexperienced adventurers. With unusual luck, some of the very valuable items (e.g. Stone of Jordan) can be obtained on the lowest difficulty level. When acquiring a unique item, double-check its value before trading it with another player.

The rarest item in the game is the Tyrael's Might, a unique Sacred Armor. The chance of it being dropped by a slain monster is only 0.00002%. You should also keep in mind that individual items in Diablo II cannot be dropped by every random enemy, this possibility is determined by the difficulty level of the game, the level of enemies in a given location, and the class of treasure you want to get. Tyrael's Might is class TC87, which means that we can only find this armor in fourteen locations throughout the game, which combined with the extremely low chance of obtaining it, makes somewhat of a holy grail. In 8 years of constant adventures on official servers, I only managed to get it once! 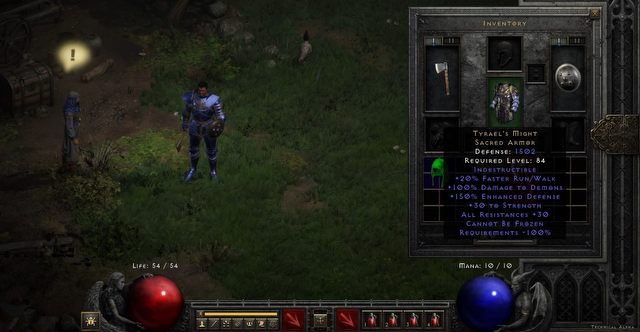 In the screenshot, said armor.

The Phase Blade is the only item that does not have a durability attribute, meaning that it is indestructible; at the same time, the item cannot be ethereal (with a very rare exception; there is a small chance for a rare ethereum Phase Blade drop, but it does not come in other forms  as a normal, magical or unique item).

Ethereum items have significantly better damage or defense attributes than their regular counterparts, but they cannot be repaired. Weapons of this type are perfect for a mercenary, because they don't use up the item's durability while using it, so they can use it until the very end of the adventure with the game.

Many of you may not know or remember that in Diablo II, there is a "crafting" system. It involves mixing given items in the Horadric Cube with appropriate combinations of runes, gems, and gemstones. A simple example is the caster amulet for characters using spells, the creation of which requires, among other things, the Ral rune, a magic gem, and a perfect amethyst.

The Horadric Cube contains many secret recipes that can often save you in an emergency. If you happen to have lost all your gold upon dying (although you're likely to gamble it all away first), you can repair your equipment with the aforementioned artifact. All you have to do is place an item and the appropriate rune in it. 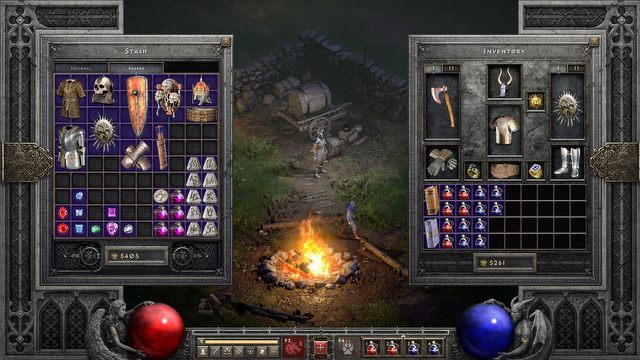 In Diablo 2, you spend half of the time in the inventory.

Read before you trade

Items offered by traders will be replaced with others after all players have left the city, or if no player present in the city has interacted with them for four minutes. In the early stages of the game, traders can be a good source of items that can be used as bases for obtaining some impressive runic words or magic items.

If you need to complete a book of a city portal or identification, just sell it to the nearest merchant. When you repurchase the book, it will contain a complete set of scrolls, which can save you a lot of time you'd otherwise have to spend unnecessarily walking between different merchants. The same rule applies to potions, arrows, and anything with a "quantity" attribute! 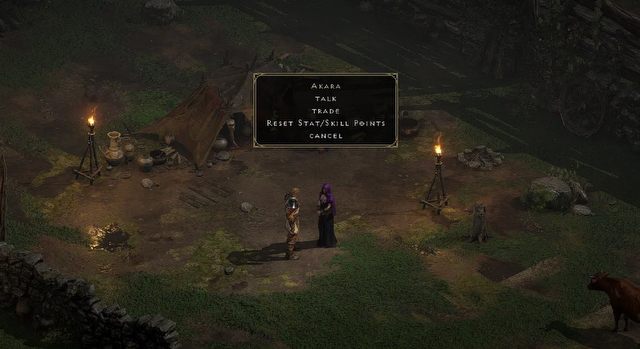 Trading is the cornerstone of wellbeing.

Speaking of potions, it's important to note that antidotes, defrost potions, and stamina potions last for 30 seconds, but their duration is combined if you drink several of them at the same time, so you can use even 6 of them before fighting a difficult opponent and provide yourself with 3 minutes of poison resistance in the process.

Some of our character's skills can be passively enhanced by investing points into others. This is called synergy, which you can read about by hovering over the icon in your character's skill tree. Synergy occurs when a point spent on skill X has a positive passive effect on skill Y. However, a distinction must be made between hard points and soft points.

Hard points are those that you get with each level and spend on developing a particular spell. Soft points, on the other hand, are acquired by the statistics of the equipment we wear (e.g. 2 to all offensive aura skills  paladin). However, soft points invested in skill X do not guarantee a synergy bonus for skill Y, only the hard points  directly invested in the spell  count. 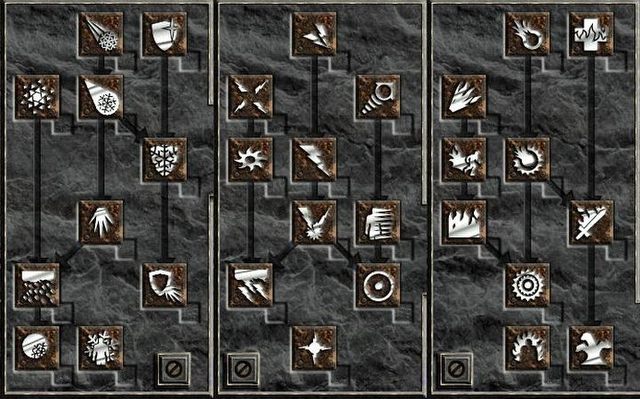 A familiar sight, isn't it?

One update in recent years added the ability to reset all of our character's skill points and attributes to spend them from scratch (for example, completely changing our play style). This option is offered for free, once per every difficulty level, for completing the Den of Evil quest in Act I. After using 3 free resets, it's possible to restore our stats again, but it requires acquiring 4 different essences, which can only be obtained from the final opponents of each act on "Hell" difficulty. The Essences must be combined into the Token of Absolution using the Horadric Cube.

As you explore the location, you may come across sealed rooms that are seemingly inaccessible. However, it is enough to look carefully at the walls, because by clicking on some of them, we can open hidden passages leading to small rooms (usually containing a chest or other treasure).

When our character runs, melee monsters have a 95% chance of hitting us. To mitigate this, I recommend using the "R" key to switch between running and walking modes. When running up to a group of monsters, we should switch to walk  then, the hit chance is affected by the level of our character, the level of the opponent, and the defense value of the character, which can often save lives.

After completing any difficulty level, you will unlock the ability to open a portal to the Secret Cow Level on it. To get to it, we need to combine Wirt's leg (we obtain it from the body of the boy lying in the upper left corner of Tristram) and the book of the city portal, using the Horadric Cube. However, keep in mind that if the character opening the teleport is present in the game when you kill the Cow King, you will irrevocably lose the ability to open the portal again, so it's best to stay away from said opponent in those situations. A fun tidbit about the Cow King is that when he dies, he drops some stamina potions, which look like glass milk bottles. 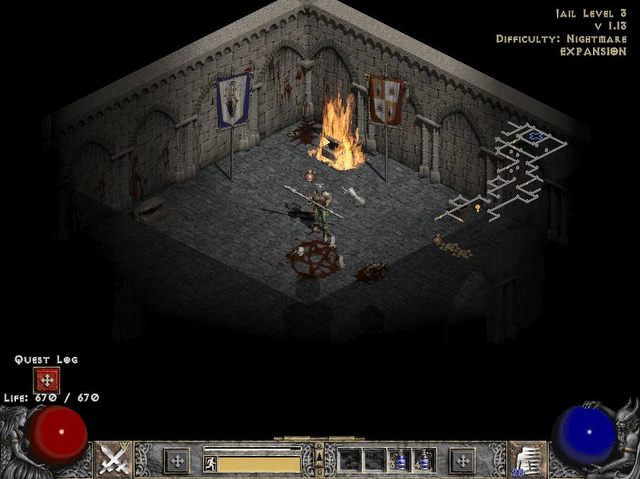 You will find hidden passages and rooms at every turn.

The assassin's traps are treated by the game as "minions," or creatures summoned by us. Unfortunately, this puts them on par with necromancer skeletons, so they don't get all the bonuses from the stats provided by our items. While traps deal elemental damage, they cannot be supported by an element's damage percentage or a negative percentage of the enemies' resistance to that element (immunity penetration). Also, the assassin class does not require a key in your inventory to open locked chests.

Speaking of chests, I advise you not to ignore all kinds of chests, corpses, loose stones, urns, and any other possible caches that may be hiding items. Especially those near elite opponents. I can't count the number of times a smashed solitary urn has dropped a more interesting item than the enemies next to it. The chance to find magic items does not affect the frequency of getting runes, gems or talismans from monsters or caches.

The Druid has a "last chance" mechanic  if our character remains in bear form and receives critical damage that should kill us, the life points will stop at one point and the character will revert to human form. This can save lives in case we receive unexpected injuries from corpse explosions and similar surprises. 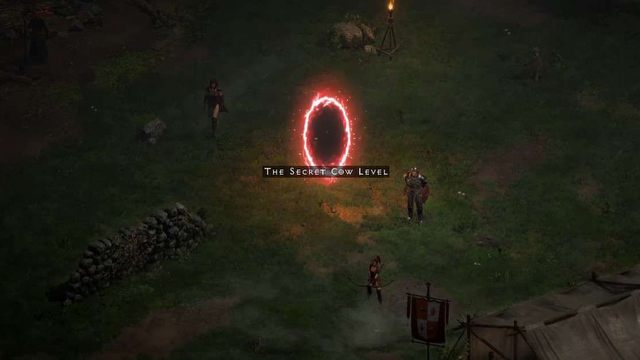 The Secret Cow Level is a cult story.

Players who prefer solo mode will be happy to learn that all of the runic words, items, and Horadric Cube recipes that are only available in multiplayer will be available to them with the release of Resurrected. Also included are special events  like Diablo Clone and Pandemonium.