I remember buying my first computer at the beginning of the twenty-first century. Well, my parents bought the one I chose. The clerk tried to dissuade us from buying a 40 GB hard drive, saying that I won't use it all in my life and that 20 GB is more than enough for me. I put my foot down and wanted it my way. And thank mighty Cthulhu for that because it hasn't been many months, and even those supposedly impossible-to-fill forty gigabytes have proven extremely tight, forcing continuous compromises and queues of games to waiting to be installed.

Almost two decades later, we have much more space, but the problem remains the same. As the storage potential of hard drives has grown, so has the size of games. A one terabyte SSD is not much when AAA games can take up to 150 gigabytes.

Fortunately, high-budget games are not all there is. Next to the giants created by hundreds of graphic designers and programmers, we also have independent productions created by teams comprising over a dozen people. These works of art may not look as glamorous, but they often offer as much fun. And-what is of our interest in today's article-they can take up much less disk space, covering dozens of hours of good entertainment in less than two hundred megabytes of memory.

Before we made a list, we had made sure that the games in question actually do not exceed 200 megabytes in size. However, given that some of them can be purchased in different versions (Steam, PC, Console, etc.), there is a possibility that some editions will go slightly beyond the limit we set  we were not able to check every available release of a particular production. 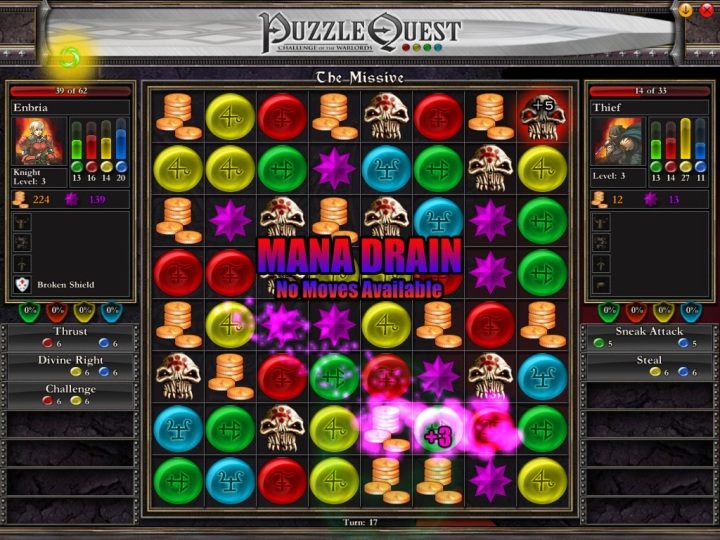 Combining match-3 logic games like Bejeweled, for example, with mechanics taken straight from RPGs might not strike as a good one. In practice, however, Puzzle Quest is a phenomenon that at the time of its debut in 2007 was so striking that it eventually started a whole series of sequels and copies (none of which, however, surpassed the ingenuity of the original). And its re-edition for Switch with some new content debuted last year.

Gameplay mechanics are not much different from what we find in role-playing games  we choose a character class from a number of quite different archetypes, travel around the world map, complete quests, and gain experience together with new equipment items that make us more powerful. And all that within a typical fantasy story. The combat system is unique-skirmishes take place on boards filled with colored balls. We need to combine these balls into sets of at least three identical ones that charge the mana needed for spells attacking enemies directly. They, of course, do not remain idle and counter during their turns.

The game is extremely engaging. Different classes allow you to use a variety of strategies in duels, and the content here should suffice to spend a good few dozen hours with the game - and I'm writing here about the standard Challenge of the Warlords edition and not the extended version for Switch.