The year 2019 hasn’t treated us with such smash hits like Spider-Man, God of War or Red Dead Redemption 2, but it still had a lot to offer. There were many interesting video games, there was a little something for everyone. Fans of souls-like genre, who have already completed all installments of Dark Souls series with a Guitar Hero controller, have received an engaging video game – Sekiro. Disco Elysium and The Outer Worlds (with Greedfall as an appetizer) turned out a delicious feast for RPG lovers. Fans of first-person shooters could enjoy Call of Duty: Modern Warfare and Borderlands 3. EA surprised everyone with the unexpectedly good and entertaining Star Wars: Jedi Fallen Order, and Dante has returned to Devil May Cry V which pleased all fans of the franchise who missed the action-packed, unrestrained havoc. Finally, a courier sent by Hideo Kojima has completed his delivery and arrived at our homes with Death Stranding. So, as you can notice, a lot of things were going on.

Still, a few titles have vanished or have been delayed till next year, leaving many players disappointed instead of over the moon. Some of these titles seem pretty obvious, and a group of devoted fans has been waiting for the others. It's time to check the list and discuss the video games that haven't been released yet. 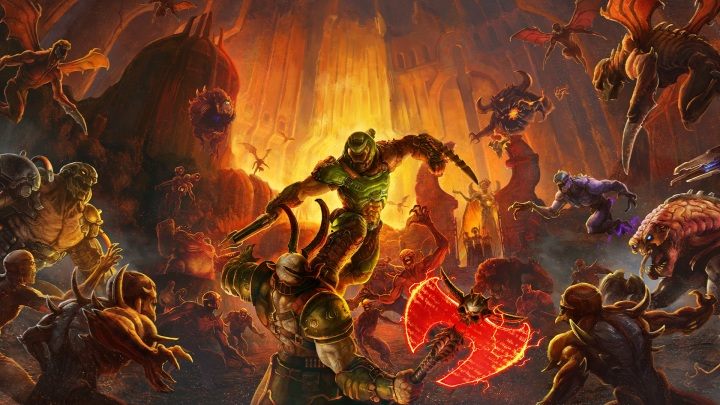 As Duke Nukem used to say: "Hail to the King, baby!”. However, the crown of high-octane FPS games that don't care about realistic mechanics or frequent weapon reloading may be passed over to Doom Eternal, a follow-up of successful 2016's Doom reboot – a video game that brought the whole franchise back to life.

...and now it's probably Bethesda's new hope – at least as a publisher. Fallout 76 has already been thoroughly discussed and overwhelmingly criticized, so now, the company has to release something really potent to finally make a difference. Odds are Doom Eternal may be a perfect candidate for such a quest. It's a true BFG – Big F...antastic Gun. If we add the incredibly confident attitude of game designers to all trailers and gameplay videos showcased during trade fairs, it may suggest that a new alpha male in heavyweight FPS category is going to conquer the market.

Doom Eternal gathers all highly acclaimed features of 2016's reboot and expands them to the n-th power. It may look like the last Doom, but there are some magnificent novelties. You'll blast off chunks of flesh from your enemies as you unleash your futuristic weapons. It's rather hard to find a game with such bizarre gibs & gore system, maybe except for the uncompleted Unreal Tournament 4 (but I wouldn't bet on it anymore). Also, you will get a bunch of new skills and items to develop the abilities of Doom Slayer. The fast-paced action is coming back – although some journalists claim that hero has a slightly slower movement speed than in the previous installment. We will get completely new exploration tools, such as grappling hook, thanks to which we can reach previously inaccessible places. We'll even get a chance to fight with a sword (a Doom Slayer lightsaber?).

All of this will take place here – on Earth, in a hellish and ravishing atmosphere infused with a touch of pathological dark humor designed by id Software. Quite recently, the company has announced that it's delaying the game in order to polish its masterpiece. We'll wait. Even if the wait turns out eternal, it's still worth waiting. This is Doom, ladies and gents.