Developing a video game requires a degree of ingenuity. Take doors for example. They're rarely merely doors: they can become anything from an obstacle the player needs to surmount, to a weapon, as in the Hotline Miami series. They can satisfy many purposes, but that's not the kind of problematic doors I wanted to talk about. The real curse are the most ordinary doors imaginable. Doors that have to open and close. Multiple times!

The developer of Death Trash recently tweeted his mind, and it turned out a great many industry people shared the exact same sentiment. Their responses read like the confessions of traumatized patients. Everyone agreed. Doors are the worst.

A seemingly ordinary door, but can cause so many problems.

Everyone shrieks when a designer requests a door. Every. Time.

Doors are one of the first things we implement in any of our games.

I don't exactly know how many man-months went into the door system in Control, but more than most abilities and weapons, for sure.

Doors were the most complicated object in South Park: The Fractured But Whole. 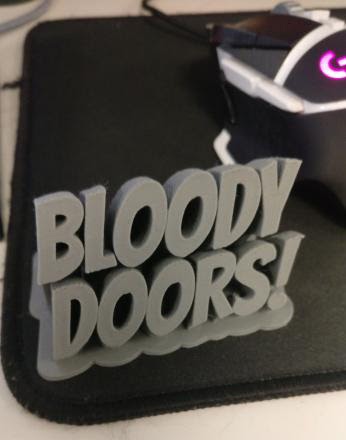 One of the designers working on the new Dead Island 3D printed himself this sign and stuck it on his desk.

What's so scary about the doors? This was well illustrated in a blog post by Liz England, most notably the lead designer of Watch Dogs Legion, who used door to explain what gamedev is all about. She listed an entire lengthy list of questions that a designer must answer before adding doors to the game. Should the player be able to open them? Can they open all of them, or are some of them only part of the landscape? How do you tell the two kinds apart? Are some doors openable, but uncrossable? How tall should the doors be? Are there opponents who won't fit? The list has 22 items, and that's still not all of it.

WHY ARE ALL THE DOORS CLOSED?

An interesting problem with the door relates to the coherence of the game's presented world. Tomasz Dziobek described it using the example of a level played in a courthouse. A building like that typically has many, many doors. The problem is that creating all the rooms that said doors lead to would be very resource-intensive. After all, in a linear shooter we don't need access to broom closet, archives, etc. That's why game developers usually decide to close most of the rooms, which unfortunately negatively affects the cohesion of the world. How do we determine which doors can be opened? According to Dziobek, developers have it much easier in this regard. They can lock most doors and no one asks unnecessary questions. That's the vibe, after all.

In the same post, the author humorously discusses how the door problem affects other people working in game development. Animators, sound engineers, artificial intelligence specialists or programmers responsible for the engine. It's amazing how many different tasks it takes to make the doors in the game functional. The animation issue is explained in detail by one of Naughty Dog's studio employees, Kurt Margenau.

The trick with opening doors

The doors in The Last of Us: Part II were added mainly to give the player more options when sneaking around. You can hide behind doors when someone spots you, or slow down enemies with them, thus gaining extra time to hide again. What problems thus arise? 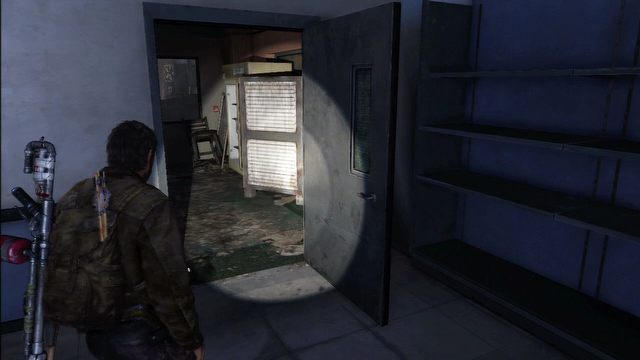 First, they had to prepare appropriate animations of opening and closing doors. Due to the incredibly high standard of animations in the game, the developers couldn't cut too many corners. The game needed adequate animations for all manners of movement, sneaking to sprinting. This involved a tremendous amount of work by the animators, who had to work hard to maintain the right balance: keeping animations realistic, but also keeping the momentum.

Once they got opening out of the way, they were left with a much more difficult problem of closing the door. At first, they tried to give the player control over it. Various solutions were tested, including the requirement to hold down a button, but nothing seemed to be satisfactorily. It would be possible to make the player give up controls for a brief moment and make the character close the door independently, but it's not what you want when you strive for highest immersion possible. Another big problem were, of course, animations of running through doors.

Full control over door operations was given to the player by the creators of the horror classic Amnesia. In the game, the player had full control of the doors. They were able to decide how wide to open the door, and when to do it, and the game also required closing them behind you to slow down the monster. In this game, however, it was not only a fully justified procedure, but as such it perfectly amplified the tension.

In the end, they decided on a solution that was primarily functional and convenient. During combat, all doors close automatically. We can do it slowly, but if we open the doors very quickly, they will slam shut behind us. This effect was achieved by creating a completely new and unique object in the game engine. You guessed it. It did require a lot of work.

Animation isn't everything, though. Correct door sounding is also a complicated process, not really enjoyed by sound engineers. On top of that, there are also proper AI algorithms to avoid enemies getting stuck on doors, or adding double hinges so that the door *can* open both ways. Yes. The doors in The Last of Us: Part II, as in many other games, open in two directions like doors in a saloon. That way, no matter which side the player walks, they're always on the push side. Not very realistic, it's nearly a perfect compromise. 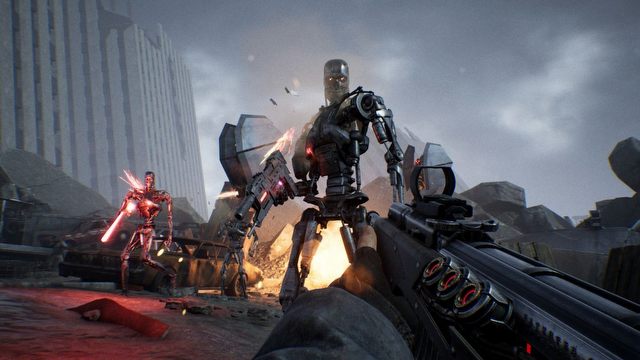 The Terminator does not open doors, it breaks them.

Kurt's post ends with the telling conclusion stating that there probably wasn't a division of the company that wouldn't have something to do with in-game door operation. 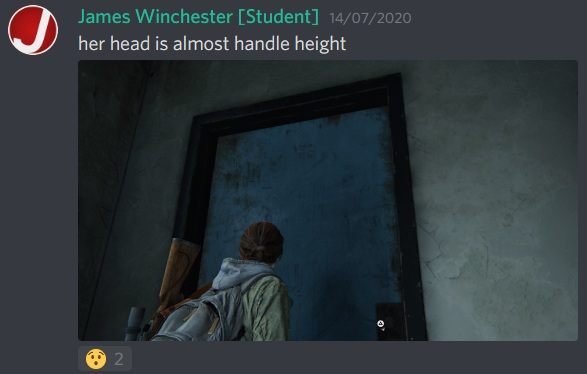 Graphic designer James Winchester pointed out that the doors in The Last of Us: Part II can be quite sizable. Roughly twice the size of human characters. The developers have confirmed that this is a deliberate effort to improve camera performance.

Doors are also the bane of artificial intelligence. Enemies usually have a specific navigation through a level depending on whether the doors are closed or open. There are also times when players try to block opponents by closing doors right in front of them. Creators of Terminator found one solution to both of these problems. The title machine doesn't open doors, it breaches them. Once a door is breached, it can't be really opened or closed anymore, and once the breaching animation triggers, it's no longer possible to interact with the doors in any way.

A funny thing happens, however, when you go around the Terminator who's in the process of breaching and start shooting it in the back. Theoretically, the opponent should immediately stop and return fire, but it does so only after the lengthy animation ends. Why? By interrupting the animation, the Terminator would leave the door in a state of only partial devastation, which would require defining new properties for it and creating new animations, thus a lot of extra work. Another solution would be to cut the duration of the animation, but this would negatively affect its visual quality.

Implementing doors isn't the end of the fun. After that, you still have to make sure everything works as it should, and then repeat this step at every stage of production, because doors are malicious beasts and they really like to spoil your efforts. It's almost common for players to use them to block opponents, who are often completely helpless against these horrific contraptions. However, there are even more interesting instances, unforeseen by the creators.

In an interview, CD Projekt employees revealed that in The Witcher 3 they once ran into a tricky problem. While playing, they discovered that all the doors available in the game world suddenly stood open. Also those that weren't supposed to open. Ever. This would of course invite players inside buildings that were otherwise merely empty props. After a long search, it turned out that the problem was caused by the quest from Blood and Wine, which included the siege of a castle. 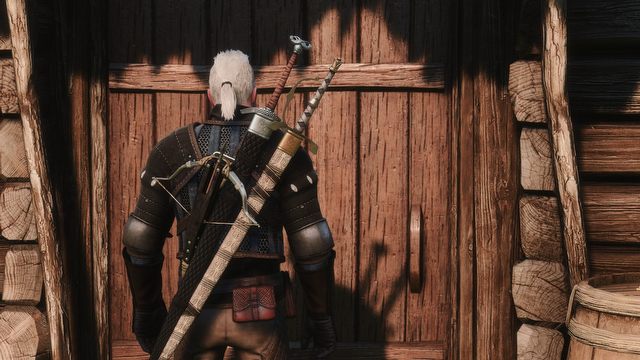 Geralt also has problems with doors.

This is because the needed to use a command at one point, which closed all the doors in the game. The goal was a noble one. The creators wanted to prevent players from getting distracted off the main task. When the designated mission step was over, a second command would be triggered to open the door again. All the doors! Fixing this simple mistake proved to be a laborious task. A single person had to go through ALL THE DOORS IN THE GAME and appropriately mark some of them as "doors that used to be locked and should remain locked afterwards."

PEEK INSIDE THEN SHOOT

In Arizona Sunshine VR, doors were also significant, since you never knew whether a zombie wasn't waiting on the other side. So I would usually tilt it gently with one controller and put the gun in the crack with the other.

Similarly, the tactical shooter Ready or Not aims at a similar level of door realism.

Marcin Pieprzowski, who was in charge of testing The Witcher 3, also talked about doors on Twitter. He revealed they created doors that locked for the duration of a bossfight, then unlocked after the boss was defeated. The testing department found 12 (!) instances in which these doors would not unlock, and thus, the player could not leave the room. This happened, for example, when we saved the game right after a fight and then reloaded it. This time the solution to the problem was simple. Don't lock the door.

When you know all these facts, it should no longer surprise anyone that many studios choose to solve the door problem in the most efficient way possible  by completely removing them! You may not have even noticed it, but interactive doors are almost absent from games in the Assassin's Creed series. Most of the time, they only appear in precisely directed cutscenes, and the recently released Valhalla is the first installment in the fourteen-year-old series where they have become commonplace. It's worth appreciating, because it must have been quite an effort.

Do you remember the first Modern Warfare? In the campaign of this game we faced closed doors several times. At such moments, a directed script would usually get our teammates to do all the inconvenient unlocking and opening, leaving the pleasure of storming the room to the player. It looked professional and built immersion while reducing the risk of glitches. 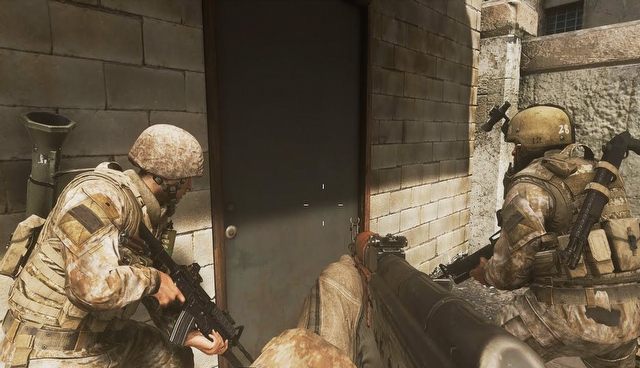 Definition of door in the military  a rectangular-shaped field obstruction equipped with a minimum of two hinges.

There were no interactive doors in Call of Duty 4: Modern Warfare 's online mode, which didn't particularly surprise anyone, because firstly, rarely has any online shooter had them, and secondly, the pace of action was such that no one would probably bother opening and closing doors.

In 2019's Call of Duty: Modern Warfare , in the online mode, we couldn't just open and close doors anymore. We could open them normally, slam them open while running, or even slowly slowly crack them open, peeking down sights through the gap. That's what we call progress.