“What the hell!? Why... why is that guy screaming at me,” I plaintively squawked at my buddy, Jeff, while waggling my joystick to-and-fro like a boy possessed. “Because you’re basically trying to break out of jail,” was Jeff’s quick response. “I thought this was a castle or something? And what language is that,” I continued to query. “It’s German… they’re Nazi’s. And this is like a Nazi prison-castle thing,” Jeff informed me as though we hadn’t just learned about World War II and the Nazi Party about a month previous in school. “Jeez… this game is in-TENSE!” 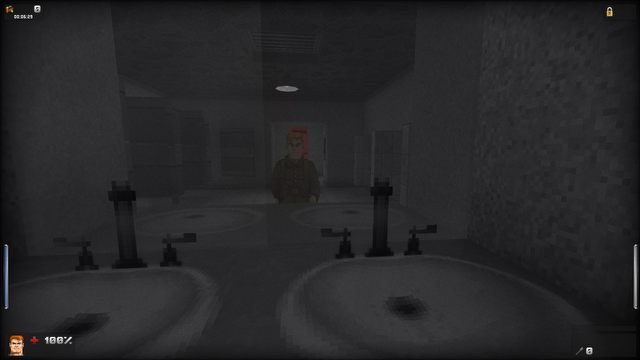 B.J. still looks good after all these years…

And that was my introduction to Castle Wolfenstein in 1983 on my friend’s Atari 800 computer. I immediately became obsessed with the game because, well, it was just unlike anything else I had ever played up until that time. The most involving and/or complicated game I had played until I was confronted with the glory of Wolfenstein was Raiders of the Lost Ark on Atari 2600, and that was because you had to use two – count ‘em TWO – joysticks to control all of Indy’s archeological exploits. Hell, the game was even boxed with a special plastic tray so you could align both joysticks properly. But this… this Castle Wolfenstein… this was something completely different. Not only could you take weapons and ammunition off of dead Nazi guards, you could hold them at gunpoint and steal their uniforms, but if you weren’t careful (i.e. too damn loud), you could (and would) alert guards in adjacent rooms. If all of that sounds somewhat familiar, it’s because all of those cool, stealth gameplay mechanics would later be co-opted into Hideo Kojima’s Metal Gear series. 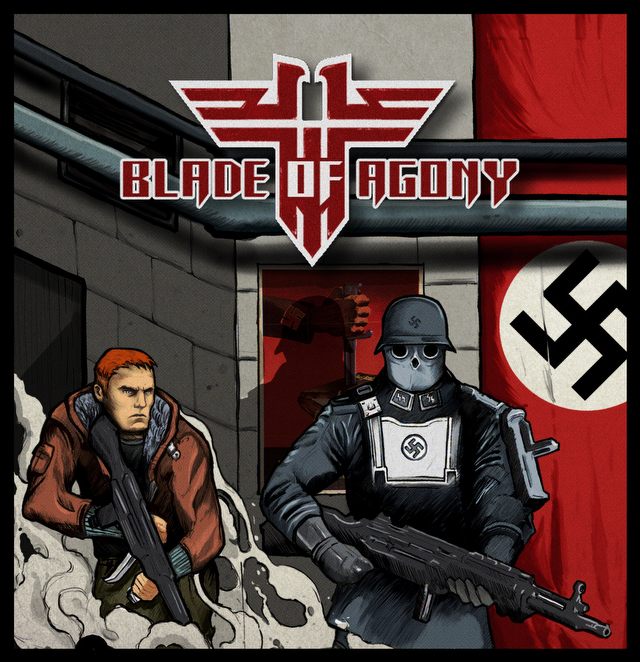 Castle Wolfenstein was originally developed by the renowned Silas Warner and Muse Software in 1981 for the Apple ][. It was later ported to the Atari 8-bit computers, the Commodore 64, and MS-DOS. Warner, a fiercely intelligent behemoth of a man (6’9” 320 lbs.; 206cm 145kg), would only create one more Wolfenstein game, 1984’s Beyond Castle Wolfenstein, which added dragging and hiding dead bodies, a pass/bribe system, and a stealth-kill dagger to the gameplay mix, before leaving Muse Software for MicroProse in 1985, as Muse was in the process of filing for bankruptcy despite the success of the Wolfenstein games and other cult classics of the era, Space Taxi and RobotWar.

But that’s not where the Wolfenstein story ends. Not by a long shot. 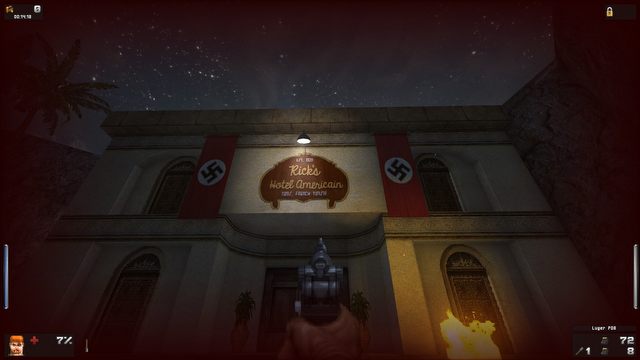 In 1991, a group of brilliant young programmers trapped in the frozen tundra of Madison, Wisconsin, would revive and energize the Wolfenstein series (the trademark had lapsed since Muse’s bankruptcy and Warner, for some reason, never reclaimed it) by shifting the perspective to first-person and making it more fast-action than stealth-oriented. The game would be called Wolfenstein 3-D (because of the three dimensional, texture mapped mazes/walls and also because it was the third game in the series), and the minds behind this breakthrough experience were John Romero, John Carmack, and Tom Hall – together better known as id Software… although id was still relatively unknown at the time. 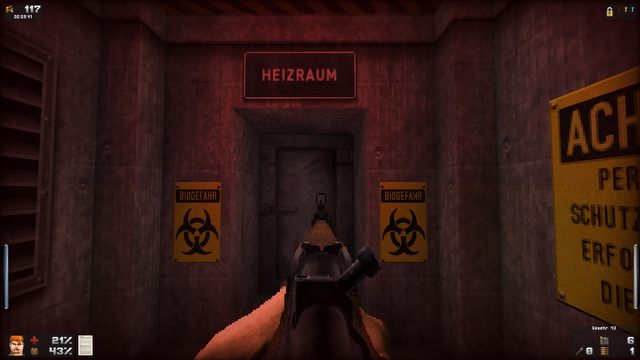 I have a bad feeling about this…

The excellent book, Masters of Doom, by David Kushner, chronicles the brainstorming session that birthed the idea of attaching the Wolfenstein concept to Carmack’s sleek and powerful (for 1991) 3-D engine:

“We need to do something cool. You know, it’d be really f*cking cool if we made a remake of Castle Wolfenstein and did it in 3-D,” Romero said.

Wolfenstein! It was a word that struck an immediate chord with both Carmack and Tom, who, like Romero and every other hard-core Apple ][ gamer, had grown up playing the classic action title created by the legendary Silas Warner in the early 1980s. They immediately got Romero’s vision.

Wolfenstein was perfect for Carmack’s technology because it was, at its core, a maze-based shooter. The player had to run through all these labyrinths fighting Nazis and collecting treasure, then doing away with Hitler. Despite the games blocky, low-resolution graphics, it was unique in its implication of a larger virtual world. When Castle Wolfenstein was released, most games for computers or arcades, like Pong, existed on one static screen. But in Wolfenstein, the conceit was that each screen the player saw represented one room of a large castle. Each room was a maze of walls. When the player ran through the maze, the screen would change, showing a new room. Though there was no scrolling, the feeling was one of true exploration. Part of the appeal was that the player never knew what awaited in the next room: often it was a Nazi screaming in German.

Encouraged by everyone’s sympathetic reaction, Romero exploded with ideas. In the original Wolfenstein, the characters could search the bodies of dead soldiers. “How cool would that be to have in first-person 3-D?” he said.

“You could go through and, like, drag the bodies around a corner and rifle through their pockets! Prsshh prsshh prsshh!” he said, imitating the sounds.

“We have this opportunity to do something totally new here, something fast and texture-mapped. If we can make the graphics look great and fast, and make the sound cool and loud, and make the game explosively fun, then we’re going to have a winner, especially with the theme.” 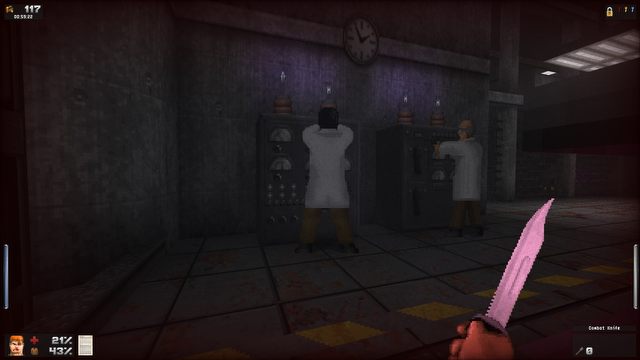 These Nazi scientists are about to taste some steel

And explosively fun it certainly was… also massively profitable (over 200,000 copies were sold by the end of 1993 alone), and it ultimately paved the way for id to make the game that would glorify them on the lips and hearts of gamers everywhere – DOOM.

As time has passed since 1991, Wolfenstein has emerged as of one of the longest running video game series of all time, and as of 2021 there are 10 Wolfenstein games – the most recent of which, Wolfenstein: Youngblood, is a spin-off from the current, main narrative, that was released in 2019.

But now here we are in 2021, and a new group of exceptional minds at RealM667 have breathed new life into the 29-year-old title, thanks to the power and flexibility of the GZDoom engine. This extensive, and rather exceptional, new mod which was released on May 1st , just four days before the 29th anniversary of Wolfenstein 3-D’s release, is called: Wolfenstein – Blade of Agony. 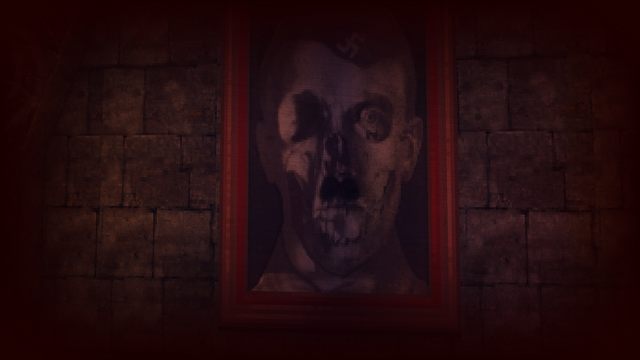 Now this is a fun portrait of Hitler

The aforementioned Romero has even been keeping tabs on this mod. When contacted by email, he stated:

I haven’t had time to get into the mod yet, but I’ve been following it for years. Each level takes a minimum of an hour to get through, so it’s a very extensive mod.

In regard to the game itself, it is… something else… and I mean that in the best way possible. It is, without question, the finest mod I’ve ever played. Several of the ones built for Skyrim are exceptional, but what’s involved in Blade of Agony really and truly takes the mod cake, in my humble estimation. 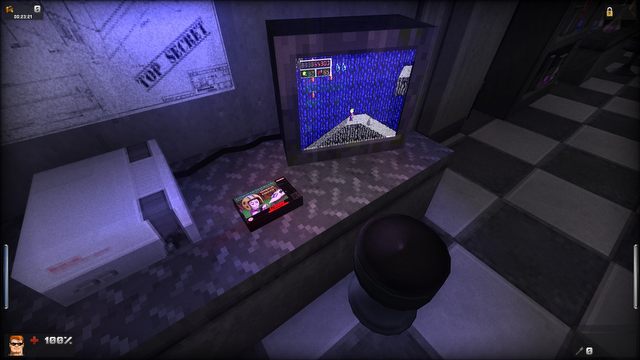 Man, what kind of crazy stuff is this scientist developing??

It starts with attention to detail, overall sense of humor, and a plethora of pop culture references imbued into the game itself. Right out of the gate, there’s a talking toilet that gives you hints, a British soldier who tells you about his dream that’s essentially the plot of DOOM, and a jukebox that lets you play the Indiana Jones and the Temple of Doom version of the Cole Porter standard, Anything Goes. Later, you’ll come across references to id Software, Pac-Man, Nintendo, Indiana Jones (again!), Casablanca, Saving Private Ryan, and even Schindler’s List. 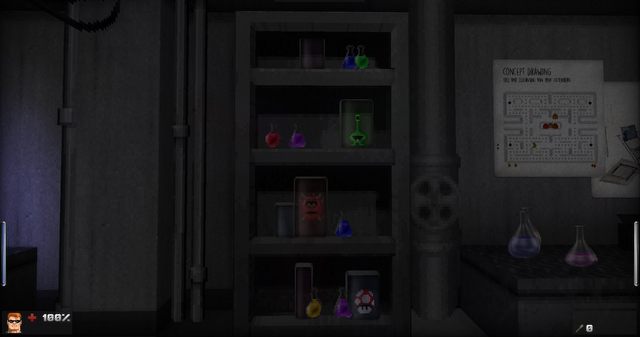 How many classic video game references do you see in this photo?

And while Wolfenstein 3-D was a straightforward, FPS blast-a-thon for the most part, Blade of Agony ups the ante for B.J. Blazkowicz here with a twisting, complex narrative that rivals what the Half Life series offers in many ways. This title also presents a good bit of variety in its three lengthy missions: The Staff of Kings (North Africa 1944), Shadows of the Reich (Poland then Iceland, 1944), and The Final Confrontation (the fictional Shattenau Concentration Camp which appears to be based on the Natzweiler-Struthof Concentration Camp that operated in Germany until 1944) as there’s a good bit of stealth, puzzle solving, and branching dialogue paths to be explored here. 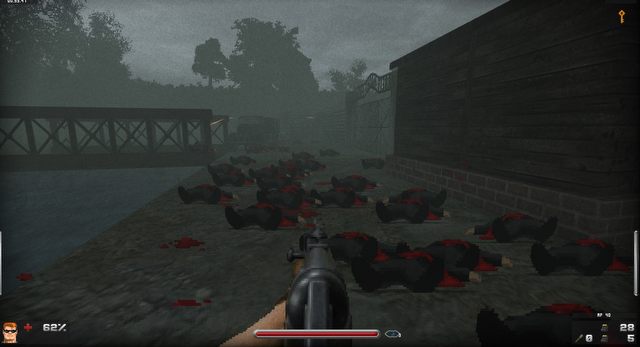 I may have killed too many Nazis here…but, in my defense, they had it coming

It’s in the third mission, The Final Confrontation, where the tone shifts though and things get “real” as B.J. infiltrates the aforementioned concentration camp disguised as a Jewish POW. In all of my years, I’ve never seen a video game address the Holocaust (probably because most mainstream studios/companies would blanch at the mere mention of it), but it is handled extremely well in Blade of Agony and it is, in a word or two, downright harrowing. Realistically though, what it does more than anything by having you plow through a true death camp environment is make gunning down Nazis just that much more satisfying – it gives you a “pride of purpose,” if you will. Killing Nazis is always good fun, but killing these particular Nazis is positively euphoric.

So, if you enjoy the Castle Wolfenstein series, particularly the old-school Wolfenstein 3-D iteration, go download Blade of Agony now for free and get to stomping some Nazi scum in to the dirt while enjoying a sublime narrative experience to boot. You all can thank me later…

Jerry Bonner has been a professional writer/editor for well over two decades in a variety of mediums including: journalism, copywriting, screenwriting, video game scriptwriting, comic/graphic novel writing, marketing communications, and technical writing. Currently, he is working for the Chinese video game company, TapTap, as a writer/editor/voice talent. In the past he has written for Microsoft/Mojang, WIRED, Playboy, IGN, 1UP, Gentleman’s Quarterly (GQ), Electronic Gaming Monthly (EGM), Ars Technica, Yahoo!, What They Play, GamePro, Imagine Publications (NOW Gamer, X360, Play tm, Retro Gamer, etc.), and many others. Since 2020, he has written reviews, previews, and essays for Gamepressure. While he enjoys all genres of games, his favorites are action, FPS’s, narrative adventure, and sports. In his free time, he enjoys reading, films, collecting vinyl records, cooking, and playing pickleball while trying to avoid getting cripplingly injured in his “advanced” age.

You may be asking yourself the question: what kind of secrets could Doom hide after 30 years? It's a primitive game – a gun in the middle of the screen, a horde of demons to slaughter to heavy music. What could I even miss?