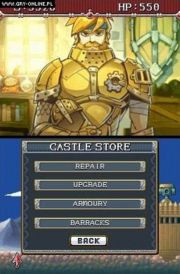 A diabolical mechanical army devastates a kingdom as village after village fall under their wrath. Only a young, brave hero, Lock, is the kingdoms last hope to survive the oncoming invasion. As a newly trained Archineer, Lock must utilize his skills to build customized towers, traps, walls, weapons, and other defenses in order to preserve the precious source artifacts.

Build and battle in 100 different areas with varying terrains on the map.

Play with friends and battle against other kingdoms via Wi-Fi.

Create and design a unique flag to represent your kingdom.