Pathway is a PC tactical turn-based RPG set in the 1930s. The game has been developed by Robotality, also known for a game called Halfway.

The story in the game starts in 1936 and revolves around the search of powerful ancient artifacts, which begin to appear more and more often on the black market all over the world. The Nazis search for these artifacts, trying to beat private collectors to it. The Nazis search mainly for the substance known as Valkyrium-500, essential for the secret Valhalla Project, but they will be more than happy to loot some other treasures. The agents of the Third Reich, however, are not the only ones looking for these relics  various associations comprising of private collectors decide to find the artifacts themselves. In the story campaign, a player controls a group of Lankford & Co employees, whos main objective is to retrieve the powerful relics before they fall into the Nazis hands.

When creating Pathway, the developers drew their inspirations from the esthetics of the pulp fiction genre  detective novels printed tabloids and popular in the United Stated in the 1930s; the same ones that inspired Quentin Tarantinos Pulp Fiction.

The PC release of Pathway is a tactical RPG, in which a player gets to control a group of eccentric characters, who carry out missions in the ancient civilizations ruins, tombs filled with traps and monsters, and even Wehrmacht strongholds.

Most of these missions offer players freedom in the exploration of vast locations; however, they also require a player to fight many battles using the turn-based combat system. Players have to utilize characters abilities and take cover behind the elements of the environment. In between the missions, one gets to the base in which he can manage his team, talk to NPCs and makes story-related decisions. The game also features the character development mechanics, which allow players to acquire new skills and upgrade the old ones.

The creators of Pathway decided to implement the pixel art style; nonetheless, the technological layer of the game is interesting. All levels are procedurally generated, and the graphics engine combines 2D pixels with voxels, which allowed the developers to enrich the old-school graphics with modern visual effects, such as dynamic lighting. The game also features a soundtrack written by Gavin Harrison, the same man who produced the OST of the previous game by Robotality.

The Pathway Guide is a compendium of knowledge about this pixelart tactical game. You will learn how to heal heroes, how to use them in combat, or how to get a dog and new companions. We've also prepared a detailed walkthrough, as well as a tips section.

Robotality's Pathway will let you feel like Indiana Jones

Creators of Halfway are preparing Pathway - a 16-bit tactical RPG that will make you feel a bit like Indiana Jones by letting you race against Nazi Germans in a hunt for the remains of a lost civilization. 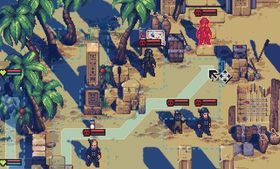 The Escapists 2 and Pathway for Free on Epic Games Store

Starting today, we will be able to get The Escapists 2 and Pathway for free on Epic Games Store, which will replace the still available ARK: Survival Evolved and Samurai Shodown NeoGeo Collection.