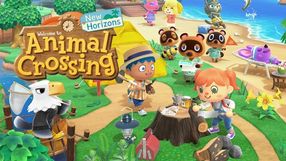 Spin-off to the popular Animal Crossing series, designed as an electronic board game, set in the universe of the series that has been developed since 2001 by Nintendo. During the game, we use amiibo figurines and cards, transferred into the game world via special NFC reader. As we play, we throw virtual dices and move over a special board, full of various mini-games, prizes, and sometimes traps, which will cause us to lose, for example, virtual money. The goal of the game is extremely simple: to make our character the happiest resident of the village. The title, like most digital board games, is designed primarily to be played in multiplayer mode. Notable features of Animal Crossing: Amiibo Festival include extremely colorful, 3D graphic designs and interactive board game that changes with each successive seasons, as was the case in previous full-fledged installments of the series.

A spin-off of the popular Animal Crossing series by Nintendo. Unlike the other titles in the franchise, Happy Home Designer is not a life simulation game, but a software for designing interiors of the virtual characters' houses. In the game you find a range of options and items allowing you to customize the house according to the character's desires. On the floor you can place carpets, while the rooms can be furnished with bookshelves, benches, tables, wardrobes, or other objects. The gameplay mechanics are very simple, focusing on choosing objects and placing them at the desired spot. The game supports the amiibo cards, which you can scan and invite other characters to the house to chat or to play. The game features the same visual style as the latest Animal Crossing productions.

Animal Crossing: City Folk is the next installment of the series, which began in the glory of the Nintendo 64 console. The new game uses the WiiSpeak microphone.